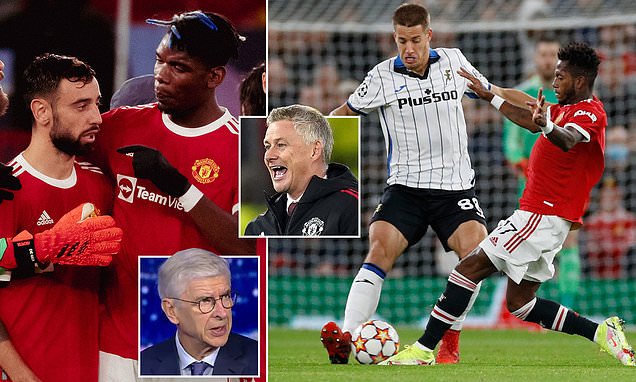 Arsene Wenger believes Manchester United boss Ole Gunnar Solskjaer may have stumbled across a solution to his midfield conundrum in the 3-2 comeback win over Atalanta.

Solskjaer started with a midfield base of Scott McTominay and Fred and benched Paul Pogba but United endured a disastrous first half and fell 2-0 down to the Serie A side.

Pogba entered the fray for McTominay in the 66th minute with United trailing 2-1 and Wenger was impressed by what he saw in the midfield trio of Fred, Bruno Fernandes and the France international.

Speaking as a pundit on beIN SPORTS, former Arsenal boss Wenger said: 'Pogba, I thought, did well. Pogba gave them more power out from deep in midfield by creating more dangerous balls.


'And when Pogba came on Fernandes became better. Fernandes had a poor first half, but in the second half he came alive as well.'

And regarding Fred's contribution, Wenger added: 'I would personally highlight the second half for Fred.

'Fred saved a few crosses in the box, defensively outstanding and he worked unbelievably hard in the second half.'

Wenger's comments come as United boss Solskjaer is facing growing scrutiny over his position as manager.

Wednesday's victory was yet another dramatic comeback with Ronaldo getting United out of jail, but Solskjaer's side are winless in three Premier League matches.

They host second-place Liverpool at Old Trafford on Sunday, knowing a defeat would leave them seven points behind Jurgen Klopp's side after only nine league games.