Neville: Solskjaer will NOT be sacked imminently at Manchester United
Daily Mail 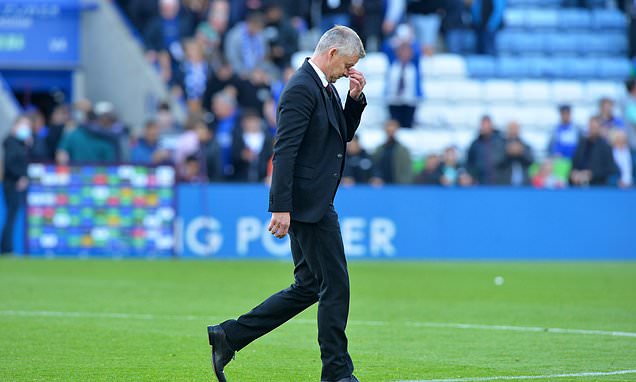 Gary Neville predicts Ole Gunnar Solskjaer will not be sacked as Manchester United manager amid the Red Devils' poor Premier League form and has asked the club to 'stick to plan'.

Solskjaer's United lost 4-2 to Leicester City on Saturday to make it three Premier League games without a win, leaving the Red Devils five points off the top of the summit with clashes agains the 'Big Six' in five out of their next six games.

Neville recognises Norwegian manager is under pressure to deliver trophies in his third full season in charge - especially with the likes of Jadon Sancho and Cristiano Ronaldo joining the club this summer - but does not think the club will pull the trigger on Solskjaer just yet.

'The club won't sack him, the club will stick with him,' Neville said in an Instagram Live Q&A on Sunday. 'I think the fact they've had those experiences with (David) Moyes, with Jose (Mourinho) and (Louis) van Gaal. I think they'll stick to plan.


'Ole is under pressure, but they won't sack him, there's no doubt about that. I know that won't please some of you, some of you want a new manager.'

United took the lead at the King Power Stadium when Mason Greenwood lashed in a brilliant long-range drive off the post, but Youri Tielemans struck before half-time with an equally-impressive sweeping effort.

Leicester turned the tables on the Red Devils after the break through Caglar Soyuncu's goal but Rashford marked his return from shoulder surgery with an equaliser for 2-2.

But United's restoration of parity lasted just a matter of seconds as Jamie Vardy lashed home from inside the box before Patson Daka tapped home a result-clinching fourth for the Foxes.

After the match on Saturday, Neville described United's display as 'nowhere near good enough' while the likes of Alan Shearer and Micah Richards slammed the club for failing to have an identity, an argument which the former United defender agrees with.

'I do understand that (there's no identity at United),' Neville added. 'That's the thing I struggle with, the identity, the lack of style either in or out of possession. I actually agree with that.

'This is Ole's third full season now and he's got to deliver a trophy this season and everyone's going be up in arms at the moment, panicking. It's that point in the year, there are massive games coming up. Atalanta this week, then Liverpool next Sunday at Old Trafford. It could be painful.

'Let's not panic here. Everyone will want Manchester United to panic. Nothing will be fixed in the next 10 minutes. Just stick to plan, get through the season and see what happens this season.

'Obviously if there isn't a trophy or it continues to go as it is, then Ole will come under great pressure. He knows that being in a job for three and a half years at that time.'

Speculation over who would replace Solskjaer at Old Trafford has risen following United's latest defeat, but Neville admits that the early names such as former Chelsea boss Antonio Conte and Leicester's Brendan Rodgers are not good fits.

'Brendan Rodgers won't happen either. He's managed Liverpool before, I don't think they would go for Brendan. But again, he's a great manager.'