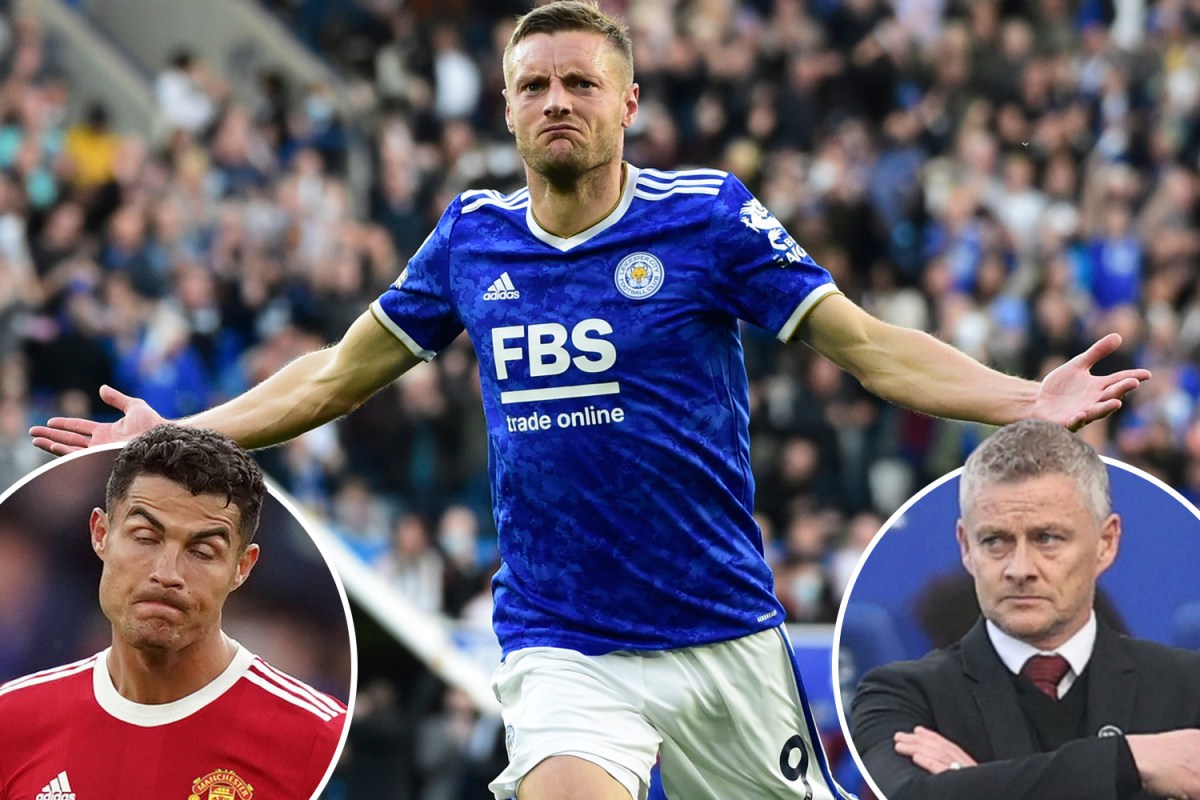 IF AND WHEN Ole Gunnar Solskjaer is finally sacked, this wonderful game should be Exhibit A for the prosecution.

Ole Gunnar Solskjaer couldn't believe what he was seeingCredit: AFP

And even after substitute Marcus Rashford made it 2-2 following Caglar Soyuncu’s goal, the visitors were unable to stop Jamie Vardy restoring Leicester’s lead almost immediately.

Substitute Patson Daka made sure the scoreline came closer to reflecting Leicester’s superiority.

Another item on the Solskjaer rap sheet on the questionable team selections.

His team’s fans were far from United at hearing the news that captain Harry Maguire had been deemed fit to return from a calf injury after very litle time back in training.

And their fears were justified not only by Maguire’s bad mistake in the build-up to Tielemans’ goal but also by an all-round rank performance by the visiting defence that not even De Gea could redeem.

It was little surprise to see Paul Pogba give another infuriating display. The way Jadon Sancho has begun his United career made his below-par showing far from shocking.

But with both Cristiano Ronaldo and Bruno Fernandes also stinking the place out, there was too much for the rest of Solskjaer’s team to do against an excellent Leicester.

The warnings were there from inside six minutes.

Maguire was left for dead by Kelechi Iheanacho as he charged down the Leicester right. But the Nigerian delayed his initial pass long enough for even the notoriously tanker-like England defender to get back in time to cut out a cross by Timothy Castagne.

Vardy shot home with the outside of his right bootCredit: Getty

Leicester were much the better side, with James Maddison playing like a man who had spent another international break seething with frustration about how others have leapfrogged him in the England pecking order.

United’s attacking line-up - Nemanja Matic was the only defensive player outside the back four - was achieving little, with Greenwood shooting straight at Kasper Schmeichel from their own decent opening.

But the young forward gave Schmeichel - and any goalkeeper in the world - no chance with his next effort.

Yes, Castgane stood off Greenwood but he made the most of the time and space, smashing an absolutely rasper in off the far post with his left foot.

In quick succession, referee Craig Pawson and both assistants enraged the Leicester fans with questionable decisions.

But they were soon in raptures when Tieleman took gorgeous advantage of some rank defending by United.

A needless bit of fannying around from their own free kick ended with Maguire negligently allowing Iheanacho to steal De Gea’s slightly underhit pass from him.

But if that was slack, Tielemans’ finish could not have been more precise - assuming he meant it.. His first-time clipped finish found the only space it could have if it was to beat De Gea. The Spaniard looked understandably bewildered to see the ball in the net.

The great Ronaldo knew he was being upstaged. So after a one-two with Luke Shaw narrowly failed to come off he attempted a spectacular overhead kick - and was penalised by Pawson.

Vardy sent the Foxes ahead before Patson Daka added a fourthCredit: Getty

The Zambian sent home fans into a frenzy in injury timeCredit: EPA

A cracking half ended with an innovative Leicester free-kick routine narrowly failing to come off.

Another lacklustre performance from Sancho continued within a minute of the restart when he was robbed by Tielemans only for Iheanacho to allow De Gea to make a routine save.

United were showing a little bit more cohesion as an attacking force but trouble beckoned at the back when Lindelof was booked for a badly misjudged challenge on Vardy.

Shots from distance were being taken at both ends, but with nothing close to the accuracy of the first-half pearlers. Greenwood, Matic, Maddison, Tielemans and Matic were among the guilty.

Sancho was put out of his misery with 25 minutes to go and on came Rashford, giving a competitive debut to his new haircut.

Brendan Rodgers was delighted with his Leicester playersCredit: AP

Maddison looked disappointed, and rightly so, to be replaced by Ayoze Perez but the home crowd sensed a winner as Tieleman surged forward with 15 minute left.

This time De Gea was able to divert the ball on the post. Moments later, Vardy played through Daka and De Gea saved with his legs.

But after making another stop from Daka after the resulting corner, the United goalkeeper was powerless when the ball broke for Soyuncu to score from close range.

Pereira wasted a great chance to make it three and LEicester were immediately punished when Rashford ran on to Lindelof’s long ball.

But justice was served. Perez teed up Vardy and after another near thing, Daka completed the scoring in stoppage time.