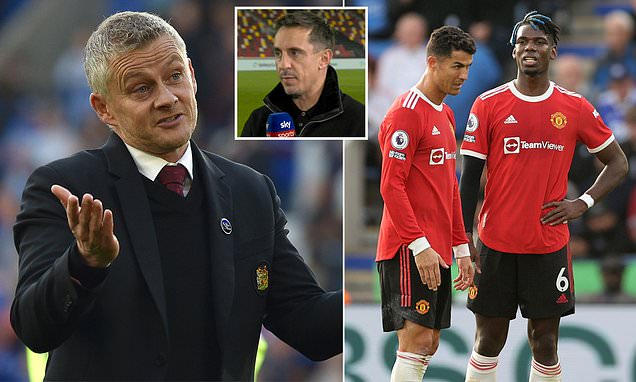 Gary Neville has launched a stinging criticism of Manchester United as he claimed that Ole Gunnar Solskjaer's side 'are nowhere near good enough'.

United were beaten 4-2 by Leicester on Saturday, with Neville lamenting the lack of organisation in the team and their inability to cope against any 'half decent' team.

Former United defender Neville also stated that the team are extremely weak in terms of pressing the opposition.

Speaking on Sky Sports, Neville said: 'They are nowhere near good enough. The moment they start to play half decent teams they're going to struggle.

'They're nowhere near good enough out of possession, they're the weakest out of those at the top of the league without a shadow of a doubt in terms of general pressing - they don't press.'

Despite the high-profile return of Cristiano Ronaldo and other major signings such as Jadon Sancho and Raphael Varane, United have struggled for consistency in the early stages of the campaign.

As well as Leicester, United have also been beaten by Young Boys, West Ham and Aston Villa this season, while they drew against Everton and Southampton.

Neville also believes that there is a lack of balance to some of Solskjaer's team selections.

Against Leicester, for example, Neville felt that Solskjaer selected a side that contained too many creative or attacking players, which left the defence exposed.

He said: 'We've seen the team that's been picked today (at Leicester) with Greenwood, Sancho, Ronaldo, Pogba and Fernandes in. Five of them. I wouldn't want to be a defender in that team.'

Solskjaer has been in charge of United for almost three years and has yet to win a trophy, with Neville adamant that pressure will now start to build on the Norwegian.

As well as the manager, Neville says the pressure will start to build on the United players

'They won't do anything with the manager, ultimately the club are stable in that respect of what's happened in the last 10 years, they recognise they're going to go through these moments.'

United took the lead against Leicester through a superb goal from Mason Greenwood, but Youri Tielemans equalised before Caglar Soyuncu put the Foxes ahead in the second half.

Marcus Rashford, on as a substitute, levelled for United, but Jamie Vardy and Patson Daka proceeded to score for Leicester.

United's next game is at home to Atalanta in the Champions League before they host Liverpool in the Premier League next weekend in a game where there will be much scrutiny of Solskjaer's side.