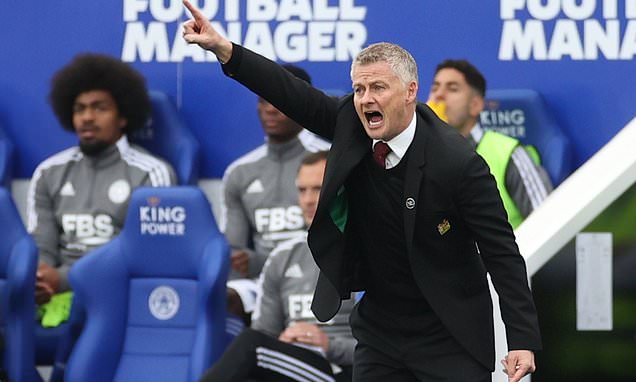 Ole Gunnar Solskjaer admitted Manchester United's performance against Leicester on Saturday afternoon was 'below par' and held his hands up for making some poor decisions.

Manchester United took the early lead through Mason Greenwood's spectacular finish, but Leicester fought back hard to win 4-2 and end the Red Devils' 29-game unbeaten run away from home.

Solskjaer expressed his 'disappointment' with United's 'sloppy play' and said that his team were not worthy of continuing their unbeaten run after conceding four goals.

Speaking after the game, Solskjaer said: 'When you look at the game after and the four goals we conceded were all very poor.


'When you concede four goals and play like we did, we don’t deserve to continue that run. Definitely, that performance was very below par and not good enough.

'We started with a very good goal from Mason and we were knocking on the door to get another one. But sloppy play saw us concede that first goal.

'That was disappointing. Second half was still ended to end but they created the better chances.

'Two goals from set pieces is disappointing and of course, 10 seconds after you equalise…that shouldn’t happen.'

When asked about his decision to select Harry Maguire for the first time in three weeks, the United manager said: 'I picked the team and Harry showed no reaction after what he has gone through.

'For me, I hold my hands up if that doesn’t work out and sometimes it doesn’t. When we concede four it’s not great. I probably made a couple of bad decisions.'

Maguire endured a difficult afternoon - having been responsible for three of Leicester's goals.

Firstly, he was robbed of possession for Youri Tielemans' equaliser. Then he failed to keep hold of Jamie Vardy for their third. Before allowing Patson Daka to get the better of him for their fourth.

Nevertheless, the United manager has taken responsibility for the defender - saying he made the wrong decision.

Manchester United will be back in action on Wednesday for their Champions League clash with Atlanta.