Leicester 4-2 Man Utd: Away Comforts End In East Midlands
The Republic Of Mancunia 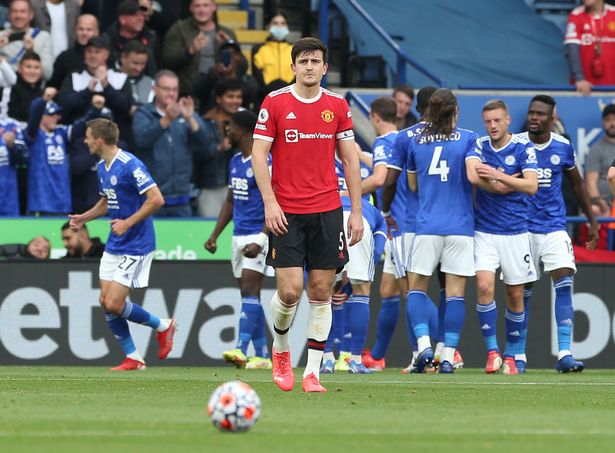 Nothing good lasts forever. The last 8 years of Man Utd should tell you that. The away record was going to come to an end soon enough but the way in which it ended and with what comes up next, it is looking harder and harder to see a way out for the Norwegian manager. The start was as inauspicious as any other but a rocket from Greenwood covered it up. A mix up from Maguire and De Gea allowed Kelechi in and started the sequence, which Tielemans ended with a lovely curled effort. The game was in to and fro, as United games always are, and either team could put up a case for going ahead. In the end, Leicester would steal ahead with a tap in by Soyuncu, making it 2 in 2 vs the Red Devils. United hit back immediately as a trademark Lindelof ball was met by a trademark Rashford run, with a trademark finish to mark his first appearance of the season. 15 seconds after, that good work was ruined as United were stung by Vardy’s great volley into the corner of the net. Patson Daka would make it safe at the end to finish off the scoring in a crazy game at the King Power Stadium.

Pressure on and off

A culmination of the poor displays, waning results and heightened expectations means that the pressure on Ole has been the highest it has been since late 2019 and early 2020. Going into a stretch of games that could very well define the season, even at this early stage, so getting one of the easier games out of the way with 3 points was imperative. But it was more of the same. Ronaldo’s introduction into the team offers some cutting edge and striking nous that United seem to have lacked, despite the attack being the biggest strength in the squad. What he doesn’t provide though, in terms of off the ball pressure, is something that he never has but a problem that has to be dealt with, especially in an area where having a good press bears a lot of fruit. Solskjaer and Ronaldo’s team mates are finding it difficult to pick up the slack in that regard. United’s spacing has never been good under the incumbent manager and Ronaldo lays those problems bare with his lack of movement off it. Bruno seems to be positioning himself higher and higher in order to help offer up some type of pressure against the opponents and today was the worst case of it. It was not only Bruno’s childish positioning that was the problem but Sancho and Greenwood were still playing like wingers in a 4-2-3-1 rather than a 4-4-2 so it essentially became a 4-2-4. Even McTominay and Fred would have found that difficult and they have this season when Bruno has done this again. Ole has always had wingers in cheating positions for the counter so it is going to be interesting on how he solves the passivity that the Red Devils display when they do not occupy the ball.

The troubles of being unable to play through a press have been clear for a very long time. The addition of Pogba and Matic was probably made with the idea of these two being better equipped to play through it. The latter done this increasingly well while Pogba had occasions where he dithered and got caught but it was not in the most dangerous scenarios like he has before until the 75th minute when Matic, more culpable, failed to play a pass to Pogba and the Frenchman was unable to stop Tielemans from collecting the ball. They had to be bailed out by the fingertips of De Gea, whose good form continues. The CBs were the ones who looked more uncomfortable when a Leicetser shirt came to press them. Lindelof has never looked comfortable when he has had to play against Vardy and today was no different. However, he was able to make amends with a quite wonderful pass to Rashford to equalise on his first return to the team. What’s more, given the 3-4-1-2 that Leicester played, Maguire was unable to provide cover for Vardy as he had to concern himself with Kelechi Iheanacho. It was something that he should have concerned himself about more when he let the Nigerian steal in with an admittedly short pass from De Gea, which led to the brilliant strike by Tielemans. Pressure, on both sides of the coins, is what is undoing Man Utd.

Rushing to a stop

The poor play from the United captain wasn’t the only thing he done wrong. It was perhaps his poorest performance since the massacre at Old Trafford by Tottenham. While that dazed performance was courtesy of mental fragility with the court case in Greece predating the season and he carried into the season and that game. Today, it was his first game in 3 weeks and he only trained a day before the game. Why Solskjaer continues to rush players back after an injury is unbeknownst to myself and many alike. It has not been the first time. Lingard, Rashford, Maguire before, Shaw, Martial and Pogba have all fallen foul to this with the manager. Of course, as professionals, they share blame in continuing to make themselves available when they are not to their most fit. Players do play through knocks and it is a well known adage that a player is never 100% fit but what we have seen through Ole’s tenure has been continued disregard of player’s health.

This is not to excuse what Maguire put on today. Going back to his old stomping ground along with the lack of fitness definitely played into it as well. He looked visibly rattled on what was his first return to the King Power Stadium with the fans in the stadium, the other two during lockdown. The Foxes fans remixed the Maguire song that England fans sing when he turns out in the white of the country with more colourful language. His passing was awry. Leicester continually cut off the passing angles the way he was facing and he was having to shimmy himself to open up another. With his limited agility, it only brings problems and that was what happened today.