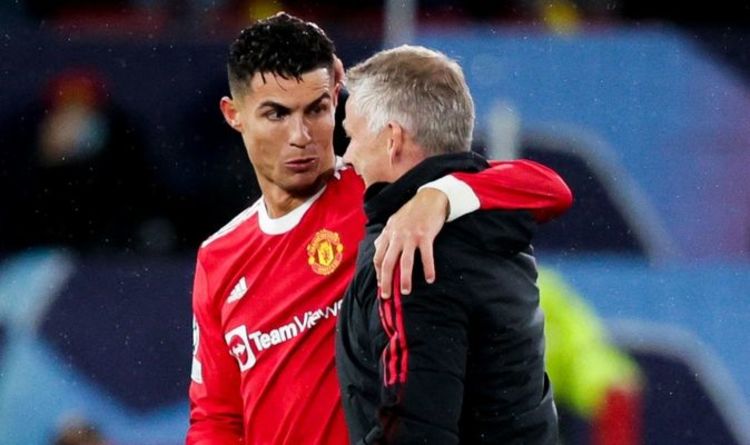 Cristiano Ronaldo has reportedly told Ole Gunnar Solskjaer he is fit enough to start every game ahead of Manchester United's trip to Leicester, in a bid to lay down a marker to his manager. The Red Devils icon was left furious with his boss when he was dropped to the bench for the 1-1 draw with Everton just days after scoring a dramatic 95th-minute winner against Villarreal in the Champions League.

Solskjaer has been keen to preserve Ronaldo's energy to ensure he gets the best from him at United while attempting to keep all of his attackers happy.

But CR7 was not best pleased with the decision, despite entering the fray in the second half, as he stormed straight down the tunnel at full-time.

Having started his second spell at Old Trafford so strongly, Ronaldo did not understand the logic behind Solskjaer's decision to leave him out as United dropped crucial points.

"You should always start with your best players," Ferguson could be heard saying.

Now The Sun say Ronaldo has made his feelings clear to Solskjaer before this afternoon's trip to the King Power Stadium, telling him: 'I’m fit to start every Premier League game.’

Solskjaer has since moved to defend his decision, explaining that there was clear dialogue with Ronaldo regarding his line of thinking.

He said: “I spoke to him before the game, spoke to him after the game and he was ready to come on when he was called upon.

“Unfortunately, when we don’t win Cristiano is not happy and that’s a mindset you want from every player. That’s absolutely no problem whatsoever.”

Ronaldo is expected to start this afternoon's clash and a United source told The Sun: "Ronaldo was extremely disappointed for being benched.

"Ole presumed that he was tired after the Villarreal game, so he decided to only put him on early in the second half.

“But Cristiano told him that he will tell him when he isn’t fit to play and that he wants to play in every single league game.

Cristiano Ronaldo stormed straight down the tunnel after the Everton draw (Image: GETTY)

“He also told him that he has come here to win trophies and that United need to play their most important players in all of the games.”

Ronaldo was in action on Tuesday as he netted a staggering 58th career hat-trick as Portugal thumped Luxembourg 5-0.

He netted twice from the spot as he helped his country take another crucial step towards Qatar 2022.

The 36-year-old was also on target last weekend as Portugal thrashed the World Cup hosts 3-0 in a friendly and he will now be looking to replicate his goalscoring form at club level.