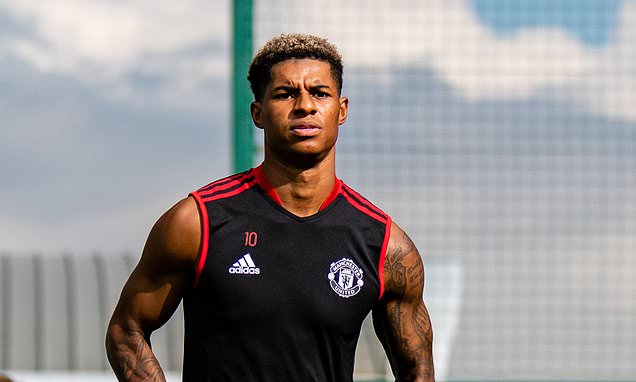 Marcus Rashford is ready to make his Premier League debut this season after answering Manchester United's calls to bulk up to protect his body from injuries.

The England international hasn't played for his club since United lost the Europa League final on penalties against Villarreal on May 26, but will be available when Ole Gunnar Solskjaer's men travel to Leicester this afternoon.

The 23-year-old underwent shoulder surgery in August and cut a more imposing figure as he returned to full training last week, following a two-month rehabilitation.

As reported this week by Mail Sport, Rashford has added 4kg of muscle to his lower body after undergoing gruelling triple sessions in the gym and on the pitch as he worked his way back to full fitness.

However, United also want Rashford to bulk up his upper body now that he's recovered full mobility in his left shoulder.

According to The Telegraph, the striker has put in long hours at United's Carrington training ground, often arriving at 8am and staying past 6pm.

The intense training regime has served a two-fold purpose as far as United are concerned.

Solskjaer was eager to have Rashford available after the international break as his team faces a daunting run of fixtures over the next six weeks, which includes games against Liverpool, Tottenham, Manchester City, Chelsea and Arsenal.

The Norwegian and United's medical staff are also determined to ensure Rashford avoids the niggles that have blighted him for the best part of the last two campaigns.

Last season, the England striker was beset by ankle ligaments problems and played through pain for almost a year before undergoing surgery on his shoulder in the summer.

That came after he spent five months on the sidelines the previous season with a stress fracture in his back, although the coronavirus lockdown meant Rashford missed relatively little football.

The 23-year-old looked clearly short of fitness in the Europa League final and was a peripheral figure at Euro 2020, where he racked up the third-fewest minutes of any England player who appeared in the tournament.

Rashford, who hasn't played an official game since missing a penalty in the Euro 2020 final shootout against Italy, has also been told to tweak his diet accordingly and eat more protein-rich foods.

The new approach appears to have paid off and Rashford looked refreshed as he netted twice on his return to action, in a 3-0 win over Blackburn Rovers in a friendly played behind closed doors last week.

News of Rashford's return to fitness will please Solskjaer, who on Friday urged him to 'prioritise his football'.

The United striker received an MBE last year and was awarded an honorary doctorate from the University of Manchester earlier this month for his efforts in tackling children hunger.

'Marcus has done some remarkable and fantastic things,' Solskjaer said on Friday.

The Norwegian will hope Rashford can breathe a new lease of life into his team's moribund attack.

United collected just one point from back-to-back home games ahead of the international break, losing 1-0 to Aston Villa and drawing 1-1 to Everton.