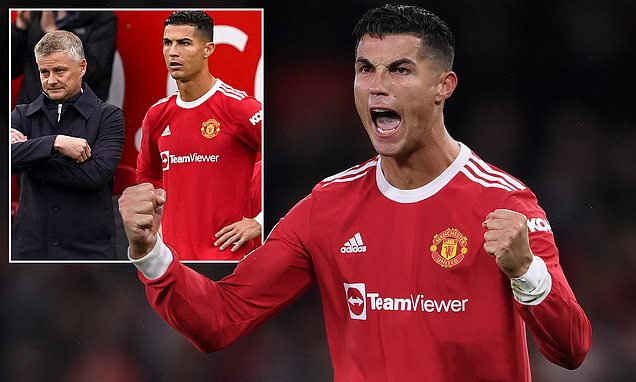 Solskjaer was criticised for starting the Portuguese superstar on the bench for their 1-1 draw with Everton before the international break.

The Norwegian has defended his decision to rest Cristiano Ronaldo, insisting that Sir Alex Ferguson also left out his Manchester United stars at times.

But the Sun have reported that Ronaldo was disappointed for being left on the bench.


They said that a source from the club said Solskjaer presumed Ronaldo was tired after the Champions League game with Villarreal, so decided to rest him.

Ronaldo reportedly said he would tell Solskjaer when he wasn't fit, wanted to start every game and felt Manchester United need to play their most important players in all matches if they are to win trophies.

The Portuguese superstar came off the bench against Everton but could not inspire them to victory as Andros Townsend cancelled out Anthony Martial's first-half goal.

Ronaldo made his feelings known after the game by storming down the tunnel and was seen muttering to himself in anger.

In a video clip leaked on social media, former United boss Ferguson was also heard saying that teams should always start with their best players.

Ahead of United's game against Leicester, Solskjaer brushed off the comment from his former manager.

In his press conference, he said: ‘I’m sure Sir Alex knows that it doesn’t bother me. But he knows how difficult this job is anyway. He didn't always play the same XI.

'He took some risks at times to rest Ryan Giggs, Wayne Rooney or David Beckham, the best players we had. Sometimes it worked, sometimes it didn't.

‘It's not really fair on the gaffer that something like this gets broadcast. You always have opinions and you speak to people in confidence.

Solskjaer came out fighting during the press conference and insisted that he was the manager and that Ronaldo can't play every game.

He added: ‘We all want to see Cristiano because he's unique, he's different, he's had a career and everyone wants to come and watch him. But the plain fact of it is he cannot play every single game that we play. That's just human nature.

‘But rotation, we need to get to April and May with everyone firing. We got to May in the final stretch of last season and we were too tired.’