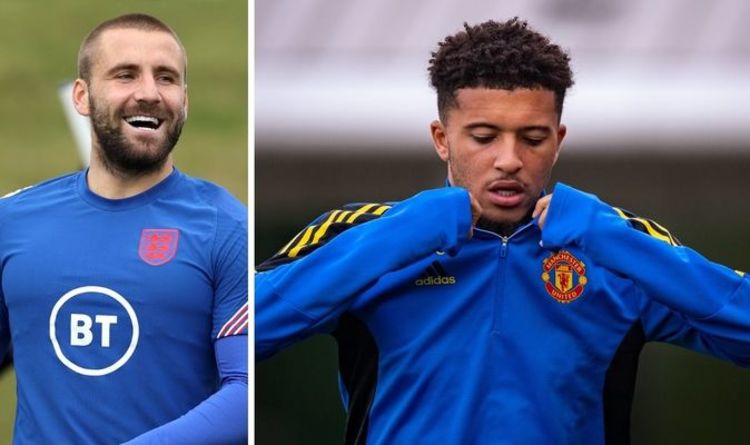 Luke Shaw believes Jadon Sancho is ready to hit the ground running at Manchester United after the international break following an impressive camp with England. The £72million man has struggled to replicate his electric form with Borussia Dortmund since arriving at Old Trafford but his team-mate Shaw is adamant Sancho is ready to shine after catching the eye at St George's Park and in the 5-0 win against Andorra.

The 21-year-old is yet to find the net for United in six matches for the Red Devils and his lack of form has seen him in and out of Ole Gunnar Solskjaer's side.

Competition for places in attack is fierce at the club following the return of Cristiano Ronaldo and that has only upped the pressure on Sancho to deliver.

But his club and country team-mate Shaw has backed Sancho to shine on his return from international duty due to the confidence that was on display while away with England.

“The most important thing for him that he gained out of that game [against Andorra] was probably confidence,” Shaw told United's official website.

Jadon Sancho has been backed to shine at Man Utd in the coming weeks by Luke Shaw (Image: GETTY)

“I think it’s not been easy for him at the start here. It normally never is, but in games like that against opposition like that it’s sort of a good game to be involved in, of course, to get minutes, but [also] to build your confidence back up.

“I can definitely see that in Jadon. I’ve been with him at England camp and he looked happy, he looked positive after that game.

“He’s kept that attitude when he’s come back here and he’s looking happy and ready to go again. He’s looking sharp and he’s always looked sharp. I can see in his eyes he’s ready.”

Solskjaer is yet to deploy Sancho in his favoured right-wing position and has instead moved him across to the left.

And with Marcus Rashford now returning from a long injury lay-off, there will be extra pressure on Sancho to deliver in order to nail down a place in the side.

Roy Keane, who is a notoriously harsh critic, recently jumped to Sancho's defence, declaring that he needs some time to adapt to the Premier League.

"He will be fine," Keane said on Sky Sports. "He's been at the club less than two months. There's been a lot of changes and new players have come to the club.

"Give the kid a break. Give him a chance. He is still learning his trade and is still a young player. There is big expectations.

"But as Micah [Richards] said, he has come to the club and he certainly won't be the star man; he will be down the pecking order. He has still got to adapt. Give the kid a chance."

When announcing his England squad, manager Gareth Southgate admitted that Sancho's form was not up to scratch and that he was perhaps lucky to be selected.

But United boss Solskjaer was quick to defend his player, pinpointing his performance in the 2-1 win over Villarreal.

"Was that interview [with Southgate] done before Wednesday night? Jadon was exceptional, he was electric, the crowd loved him," Solskjaer said after the dramatic Champions League triumph.

"I think he felt that connection with the crowd, and that is what we want from him, to be direct, positive, go past players numerous times.

"Yeah he's not scored yet but that night I thought: 'Yeah that's Jadon and we're going to see loads of that.'

"And Gareth has also said it's important Jadon knows they believe in him. They have invested time in him. He will be a top player. Performances are going to come.

"He'll come good, we've got absolutely no worries. If he goes there I'm sure he will play well."