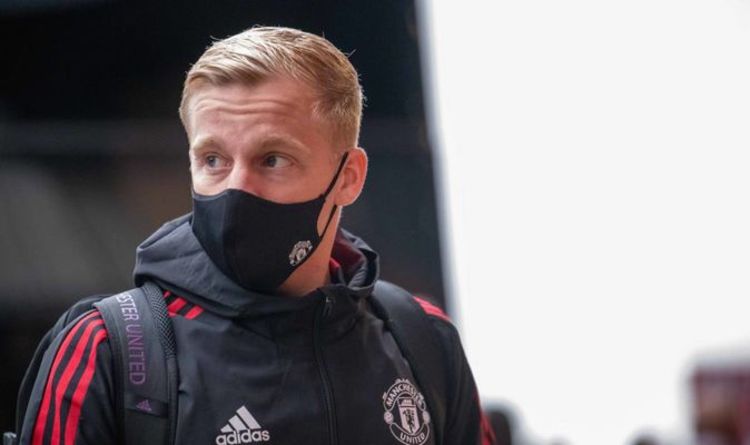 Donny van de Beek's move to Manchester United has been nothing short of a disaster, after rejecting the likes of Real Madrid to play for Ole Gunnar Solskjaer. Barcelona are keen on signing the Dutchman and throwing him a career lifeline, but United's stance may hinder a move.

Barcelona could hand Donny can de Beek an escape route as the Dutch midfielder looks to get his career back on track following a lack of game time at Manchester United.

The Dutchman signed for United in 2020 after starring for Ajax during a golden generation that saw the club reach the semi-finals of the Champions League.

The £35million plus add-ons move has not been a successful one as van de Beek has failed to lay down a consistent role within Ole Gunnar Solskjaer's side.

However, although the midfielder could be handed a lifeline at Barcelona, the Catalan club do face an issue.

Donny van de Beek is out of favour at Manchester United (Image: GETTY)

The former Ajax midfielder was Europe's next big thing, and snubbed a move to Real Madrid in favour of pursuing a future at United, which the Dutchman may now regret.

The golden generation of Ajax missed out on a Champions League final with Liverpool with just seconds to play, as Tottenham's Lucas Moura broke Dutch hearts, but many of the individuals have gone on to achieve great careers, with Hakim Ziyech, Frankie De Jong and Matthijs De Ligt just some of the stars achieving elsewhere in Europe.

The recent touchline tantrum displayed by van de Beek as United beat Villarreal in the Champions League appeared to signal the end of his career at Old Trafford, and Solskjaer reiterated following the incident that he 'does not tolerate sulkers'.

According to El Nacional, they are happy to negotiate with Barcelona over a potential move for van de Beek, but the report suggests that United would like to guarantee a fee for the Dutchman which could be a major stumbling point for the financially troubled Barcelona, who would prefer just a loan option for now.