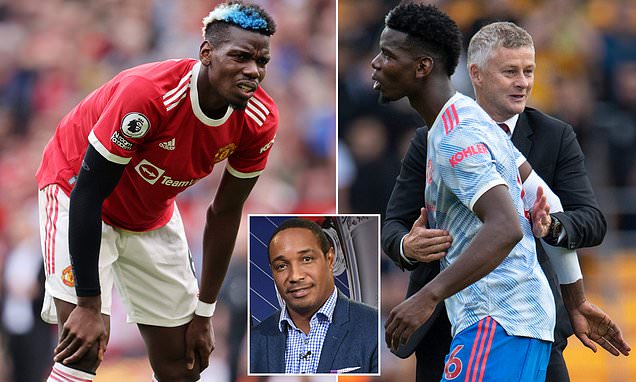 Manchester United's latest big-money contract offer to Paul Pogba is a 'sign of desperation', according to their former midfielder Paul Ince.

Pogba will be able to leave the club on a free transfer next summer and, with the months quickly ticking down, he can also hold talks with foreign teams from January.

The likes of Juventus, Paris Saint-Germain and Real Madrid have all been linked with a move for the superstar, although United are attempting to tie him to fresh terms.

Sportsmail has previously reported that the Old Trafford hierarchy want Pogba to sign the deal as soon as possible, a move which would protect his value.


It would provide him with a significant increase on his current £290,000-a-week contract, it is understood, and would run for a minimum of four more years.

However, Pogba is continuing to hesitate over putting pen to paper, and Ince says the extension comes as a surprise considering he doesn't start every game.

'That's a sign of desperation from Manchester United in offering that contract,' Ince told The United Stand.

'Obviously, they're trying to persuade him to sign this deal. It's a lot of money for someone who has been in and out of the side.

'He was on the bench two weeks ago against Everton and then all of a sudden you're saying: "Here's £400k-a-week!"

'Where is his ideal position? Where does Ole [Gunnar Solskjaer] see him playing week in, week out? We know where Bruno Fernandes plays, that's easy enough. But where does Paul Pogba play?

'He was more advanced at the start of the season and his assists record has been fantastic this season. He was unbelievable against Southampton.

'But I'm looking at this and thinking, "What makes you offer Paul Pogba £400k-a-week at this precise moment?".

Pogba enjoyed a superb recent spell with France, having helped them win the Nations League

'He's not pulling up trees and his performances have been on and off.'

United boss Solskjaer has been coy over Pogba's future, insisting that talks with the player are 'continuing', and there is no clear sign as to his decision.

Pogba has impressed on international duty with France, having helped his country to win the Nations League after they beat Spain in the final.

He has also enjoyed a good start with United, notably for laying on seven assists in seven appearances in the Premier League so far.