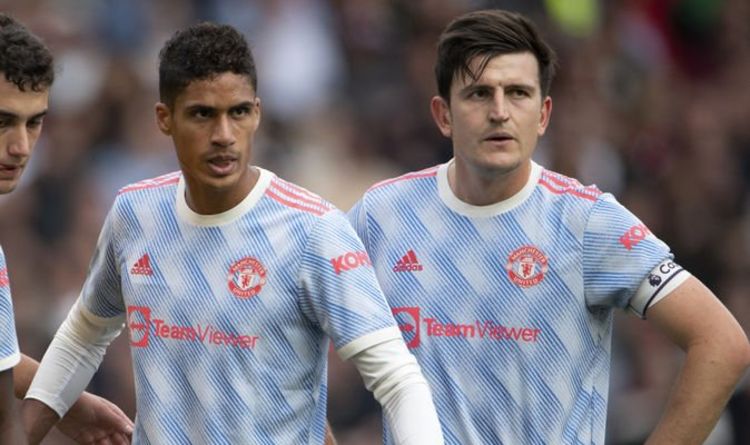 Manchester United boss Ole Gunnar Solskjaer will be forced into two changes at the heart of his defence for Saturday’s Premier League clash with Leicester City after influential centre-backs Raphael Varane and Harry Maguire were ruled out of the clash. The Red Devils will be looking for their first top-flight win in three games against Brendan Rodgers’ side.

Varane was in Nations League final action for France on Sunday but had to be substituted just before the break after sustaining an injury.

The 28-year-old went down in pain after making a clearance and walked off the pitch flanked by medical staff.

United later confirmed, he is set for a spell on the sidelines.

“Raphael Varane sustained a groin muscle injury in the UEFA Nations League final and has commenced rehabilitation at the club,” read a club statement. “He will be out for a few weeks.”

Maguire has been out of action since being forced off during his side’s 1-0 defeat to Aston Villa last month.

The 28-year-old came off midway through the second half of that clash and subsequently watched his side’s clashes with Villarreal and Everton from the sidelines.

He also missed England’s World Cup qualifiers against Andorra and Hungary this week.

“It's getting there,” Maguire said when questioned about his injury earlier this week.

“I still haven't trained yet with the squad. But I am getting better - I am progressing as I should be.

Solskjaer may be able to call upon Marcus Rashford for Saturday’s clash, however, after the England forward returned to action in a behind-closed-doors friendly against Blackburn last week.

The 23-year-old scored twice in the game and has been training alongside his United team-mates during the international break.

Rashford, who was awarded an MBE last year following his off-the-pitch work during the COVID-19 pandemic, hasn’t played a competitive match since Euro 2020 after undergoing an operation for a shoulder injury.

“It's been a long, long time for Marcus of course,” Solskjaer said at the end of last month.

“Probably the longest he's been out but he's needed it. He looks raring to go.”