Manchester United 'tell agents there is no managerial vacancy to fill'

‘No time to lose’ if Manchester United are to mount title bid, admits Solskjær

How Manchester United can beat Liverpool in the big weekend clash

Glazers in Man United talks to develop Old Trafford and increase capacity to over 80,000

Bruno Fernandes ‘might be a doubt’ for Liverpool game tomorrow

Ronaldo doubles down on his belief we can succeed

'Are you not ASHAMED?' - Ronaldo gives hairdryer treatment to Man Utd stars

Conte is NOT the man to replace Solskjaer, says Man Utd legend Schmeichel

Cristiano Ronaldo: I will 'close mouths' of critics by winning things at Manchester United

Ronaldo 'asked United stars if they were ashamed' against Atalanta 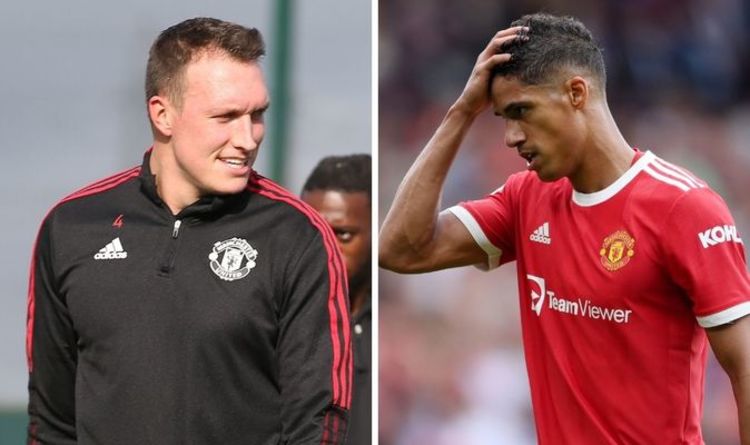 Manchester United have confirmed Phil Jones is fit to return this weekend at Leicester should he be selected by Ole Gunnar Solskjaer. By the time kick-off at the King Power Stadium comes around, it will have been 629 days since his last outing when he featured in United's 6-0 thrashing of Tranmere in January 2020.

A lot has changed since then including the Red Devils' centre-back options with Jones now way down the pecking order.

Yet the defender could still earn the chance to feature as part of Solskjaer's squad after signing a new four-year deal back in 2019.

Raphael Varane is certain to miss the clash with Leicester after being ruled out for several weeks through injury and United are light on the ground at centre-back.

Harry Maguire is also a potential doubt for the meeting with the Foxes despite revealing his condition is improving.

Phil Jones is ready to return for Man Utd with Raphael Varane out injured (Image: GETTY)

Now United have confirmed that both Jones and Marcus Rashford are in line to return this weekend with both expected to be part of the matchday squad.

“Phil Jones and Marcus Rashford have both been training with the first team over the international break following their long-term injuries and the duo could feature against Leicester in our 15:00 BST kick-off at the King Power Stadium on Saturday,” a club statement read.

Jones has faced a long road back following surgery on his knee but he has already featured for the club's Under-23 side.

The 29-year-old recently completed the full 90 minutes against both Arsenal and Brighton respectively.

It's understood Solskjaer has already informed Jones he is part of his plans this season, although game time will be limited.

Speaking to United's club website, Jones is finally looking to put his injury troubles in his rear-view mirror.

Phil Jones was last in action for Man Utd vs Tranmere in January 2020 (Image: GETTY)

"I've been through hell and back over the last couple of years," Jones he said last month.

"I struggled with my knee a little bit and (there) came a point after lockdown where I thought enough was enough.

"I kept myself in great shape over lockdown and came back. But I remember just training out here [at Carrington] and going into the doc and saying 'enough's enough'.

"Thankfully, I see the light at the end of the tunnel now and I've been back training, played a few behind-closed-doors games and I'm feeling really good at the minute."