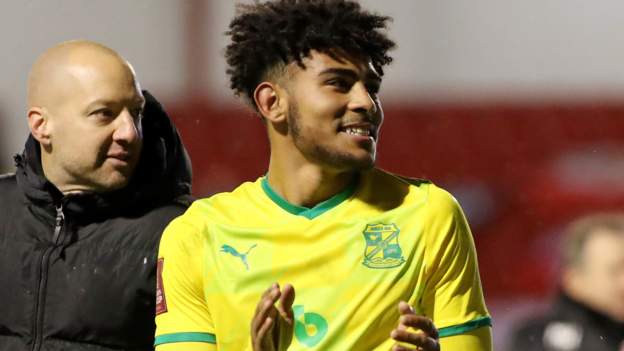 Swindon Town CEO Rob Angus says he is "absolutely delighted" with the club's FA Cup tie against Manchester City and the financial boost it will bring.

The League Two team were given a home game against the Premier League champions in Monday's third-round draw.

At the time, the club was under a transfer embargo, had just been relegated and were without a manager.

"We all know that we've inherited the club under Clem's ownership in a lot of issues, big, big debt, £4.5 million," Angus told BBC Radio Wiltshire.

"He's done a good piece of work to bring those down to about £2.5 million, but that's still substantial so this will really help.

"It's going to be a fantastic day whatever [the result] for Swindon fans, which is really well deserved given the trials and tribulations we've been through over the past few years."

The fixture against Manchester City in January caps what has been a remarkable turnaround for Swindon this season considering their summer crisis.

John McGreal was appointed as manager in May but left just a month later. The local council sought legal action for unpaid rent on the Robins' County Ground stadium, while players and staff went without full pay for a month in June.

Most of Swindon's pre-season fixtures were cancelled and when Ben Garner came in as head coach in July he had to rebuild almost an entire squad.

Four months on and Swindon are fourth in League Two and pushing for promotion, and have now reached the third round of the FA Cup for the first time in a decade.

"It's fantastic to have such a huge world power at the County Ground and great for the whole of the town and surrounding area. It'll get a real buzz leading up to the game," Angus added.

While Angus said the fixture would help financially, he was unsure quite how much would be brought into the club.

"It depends if it's on TV or not," he said. "Obviously you've got stewarding costs, policing costs and you do have to share 45% of the gate receipt with the other club and 10% with the FA.

"But it will be a big help, if we can pack the County Ground out which I'm sure we'll be able to."