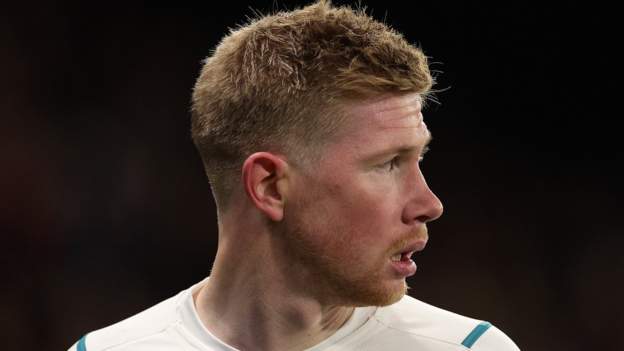 "Step by step he will play the minutes. Tomorrow he will start."

Named the Professional Footballers' Association men's Players' Player of the Year for a second consecutive season last term, the start of De Bruyne's 2021-22 season was disrupted by an ankle injury sustained at Euro 2020.

And Guardiola warned the 30-year-old he must "come back and fight for a position like everyone else".

"Kevin doesn't have to show absolutely anything to me," he added.

"But he has to come back to being himself and show himself he's back - and do what he has to do, like he has done the last five or six years, every single three days."

Premier League leaders Manchester City are guaranteed to progress as Group A winners following their 2-1 victory over Paris St-Germain in November.

Guardiola is expected to take the opportunity to rest key figures at the start of a busy month, with several young players in contention to feature against Leipzig after training with the first team.

"It's an incredible experience in Europe, maybe tomorrow some can play minutes. We have five substitutions and maybe we can use them," said Guardiola.

Leipzig cannot catch second-placed PSG, but the Bundesliga side and Club Bruges are both chasing third-place, which would secure Europa League football, in the final round of fixtures.

The City boss added: "Of course, all the guys who play tomorrow want to win. We have respect for the competition. Every game is a good opportunity to improve and there are many things we can do better."

Meanwhile, forward Gabriel Jesus will miss the trip to Germany through injury following a tackle by Watford defender Craig Cathcart, described by Guardiola as worthy of an "orange-yellow card".