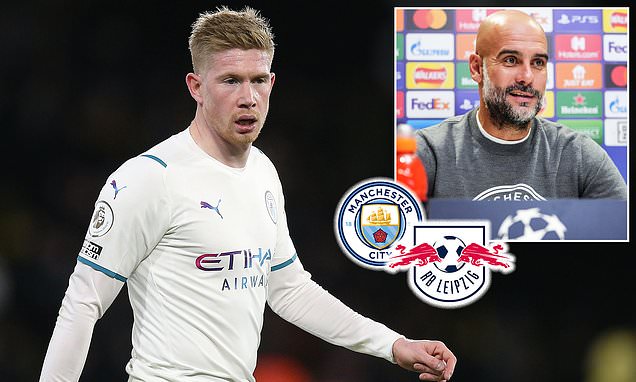 The midfielder returned off the bench during Saturday’s victory at Watford after testing positive for coronavirus.

De Bruyne missed four matches while out and will start against RB Leipzig behind closed doors.

‘Kevin was growing in his physical condition and got corona. It was a setback,’ Guardiola said. ‘The people who suffer feel so empty in the next days. Tomorrow he will start and we’ll see how many minutes he can play.’


He added: ‘Now he has to come back and fight for a position like everyone else. But Kevin doesn't have to show absolutely anything to me.

‘He has to come back being himself and show himself he's back, and do what he has to do. Like he has done the last five or six years, every single three days.’

Gabriel Jesus will not travel to Germany following a heavy knock from a challenge by Craig Cathcart at Vicarage Road, one which Guardiola labelled ‘an orange card’.

Guardiola has been frustrated at the injuries suffered by forwards Liam Delap and Sam Edozie, who would also have been in contention to feature.

‘(This season) we have made the second team weak for the Youth League but the first team is the important thing,’ he added. ‘It’s an incredible experience to see how good they are. There are five subs and maybe we can use them tomorrow.

‘They are 18 or 19 years old and you have everything ahead of you. The potential they have, these are fantastic young players, we all agree. They need to settle perfectly but the potential is there. if we have to use them it’s not a problem.’

Guardiola also appears ready to resist any loan moves for his burgeoning talents, instead preferring them to remain around first-team training in a path previously trod by Phil Foden.

‘The young players will stay here this season,’ he said. ‘It’s winter time but I think they’ll stay all season with us and we need them, it’s a good way to improve.

‘To loan we have to be sure they play every single game. And see which manager is there and the way they play. We try to let them improve in a way to play our football.

‘The best way to improve is to play every single week. They can do it here with the second team but that competition isn’t strong enough to make the step. Right now, training with the first team for a short period is really good. They see the quality and the fundamentals that we want.'