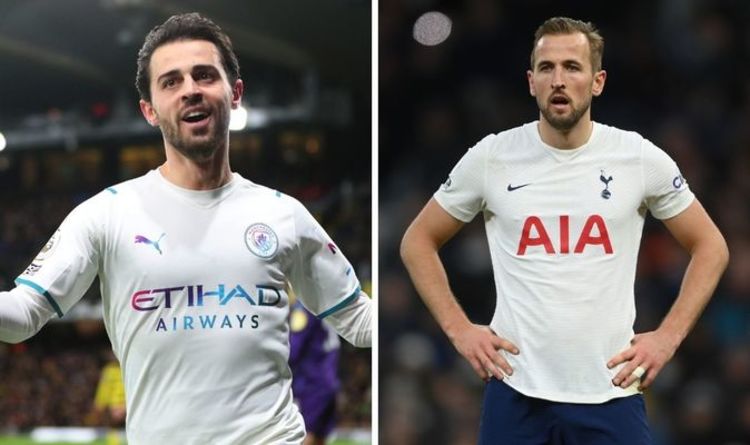 Tottenham have been scrutinised by pundit Tony Cascarino for failing to accept a swap deal for Harry Kane that included Player of the Year contender Bernardo Silva. The Portuguese technician has been one of the shining lights of this season's Premier League to date while Kane has flopped in the aftermath of this summer's transfer saga.

Kane made it clear he wanted out of Spurs at the end of last season after they failed to qualify for the Champions League.

Champions City came calling and offered £100million for the England captain as Euro 2020 was about to commence.

Tottenham rebuffed the approach, which was also said to have included the chance to add City players into the deal.

Silva, Raheem Sterling, Aymeric Laporte and Gabriel Jesus were among those proposed as part of the package.

Bernardo Silva was reportedly offered to Tottenham in a deal for Harry Kane (Image: GETTY)

But Daniel Levy simply wasn't interested in getting involved in negotiations and made it clear that Kane was not for sale at any cost.

Since then, he's managed just one Premier League goal this season after admitting that the transfer saga and England's Euro 2020 heartbreak had taken its toll - both physically and mentally.

Kane failed to score again on Sunday despite welcoming basement boys Norwich to the Tottenham Hotspur Stadium as Lucas Moura, Davinson Sanchez and Son Heung-Min netted the goals in a comfortable 3-0 victory.

And Cascarino is adamant Spurs missed a golden opportunity in landing Silva plus cash for their star striker given the way things have panned out this season.

“If you could get Bernardo Silva in the deal and lose Kane, you’d get a bit of money but you’d get Silva," Cascarino told talkSPORT.

“We had this conversation. If you could get Bernardo Silva in the deal… you’ve lost Christian Eriksson and not really replaced him with the quality of someone like Bernardo Silva.

“That conversation was this summer about Bernardo Silva as it wasn’t certain he’d stay at City. From the start of the season, he’s just been fantastic.”

Meanwhile, Bernardo has netted seven times in 14 outings for City and has been without doubt their MVP, outshining the likes of Kevin De Bruyne, Sterling and Riyad Mahrez in attack.

Harry Kane wanted to join Man City but Tottenham would not interested in any proposal (Image: GETTY)

The 27-year-old nearly left the Etihad in the summer after telling Pep Guardiola that he wanted to depart for a new chapter.

Yet a move failed to materialise and Bernardo is now reaping the rewards of Guardiola's appreciation of his quality. He netted twice in City's 3-1 win at Watford.

After the midweek win at Aston Villa, Guardiola made it clear he thinks Bernardo is the best player in the country right now.

"He is the best, and he was the best three seasons ago when we won the title with 98 points," said Guardiola. "He has a special ability to do what he wants with the ball.

"If you watch him two or three seasons ago, you will see the same player you are seeing now. The goal was really good, both the pass and the finish. He is a player on another level, in all senses."