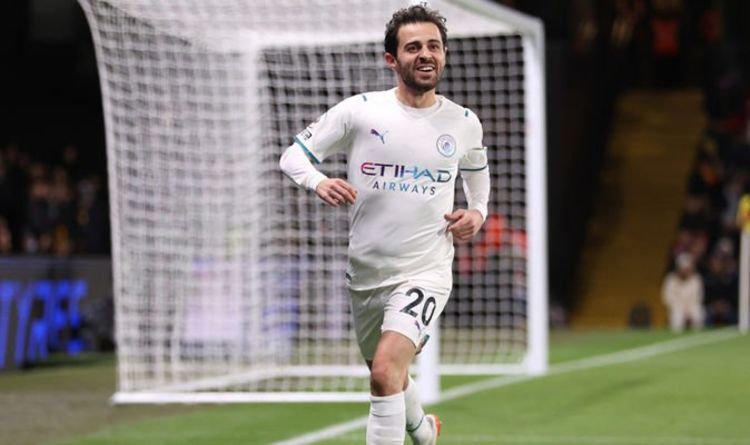 Manchester City midfielder Bernardo Silva has warned his team-mates that they have their work cut out if they are to land the Premier League title this season. The Citizens will win their fourth title in five seasons if they lift the trophy in May.

City defeated Watford 3-1 at Vicarage Road on Saturday evening to move to the top of the Premier League table for the first time this season.

Silva grabbed two of his side’s goals as City dominated their hosts from start to finish.

Liverpool also won on Saturday to jump up to second, but Chelsea dropped to third after suffering a shock defeat to West Ham.

All three sides have been in impressive form this season and the title-race looks set to be a three-horse race.

City may have finally reached the summit – but Silva is predicting the title race to be a close affair.

“Liverpool and Chelsea, they're doing an amazing season,” Silva told Sky Sports in the aftermath of his side’s latest victory.

“It's been tough for us, it's going to be tough for them and for us to compete with each other. We know that the level and the standards are very high.

“We have to do our job, we know how tough it is to win this league, the most competitive league in the world, and we're going to try and do our best, as we always do.

Manchester City boss Pep Guardiola led his side to victory against Watford on Saturday (Image: GETTY)

The 27-year-old fired in from a tight angle to put City 2-0 up after half an hour against Watford and curled home a delightful second to make it 3-0 in the second period.

He has started all but one of City’s Premier League and Champions League games this season and has continued to be instrumental for Pep Guardiola’s side.

City’s victory on Saturday means they are the first team to win 11 games this season and they will now be looking to kick on and leave their title rivals in their wake.