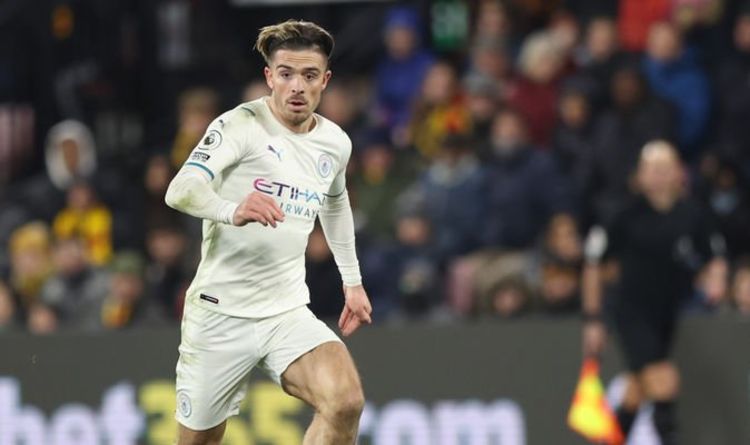 Liverpool icon Jamie Redknapp caught Jack Grealish looking ‘unhappy’ after the player was subbed off with just over 20 minutes remaining as Manchester City defeated Watford 3-1 on Saturday evening. Grealish played in a false nine role at Vicarage Road and Redknapp believes the position is ‘not ideal’ for the England international.

“I looked at his face when he came off and [he] looked unhappy,” admitted Redknapp on Sky Sports. “Maybe [he was] thinking there are goals in this for me.

“With that role, he might think it’s not ideal.”

Grealish missed a hatful of chances in the game, with the former Aston Villa man once again proving far from prolific in a City shirt.

The 26-year-old has found the back of the net just twice since making the move from the west Midlands.

And the attacker was clearly frustrated with his failure to get his name on the scoresheet at Vicarage Road.

Manchester City ace Jack Grealish returned to the starting line-up for the first time in a month (Image: GETTY)

Grealish has been used to playing in a wider role for club and country and sealed his mega-money move to the Premier League champions thanks to his performances on the left side of the Villa attack.

“I think Grealish was huffing and puffing in front of goal,” said Richards.

“But in terms of making something happen, yeah he can improve in front of goal.

The visitors got off to the perfect start after Sterling headed home Foden’s tantalising cross.

City were relentless in the opening half-an-hour of the game and, if it weren’t for a string of saves from home keeper Daniel Bachmann, Guardiola’s side would have been well out of sight.

But City did get their second after 31 minutes as Bernardo Silva danced round two defenders and finished well from a tight angle.

Silva put the game to bed just after the hour-mark as he curled the ball past Bachmann, before Watford got a late consolation courtesy of a Cucho Hernandez strike.