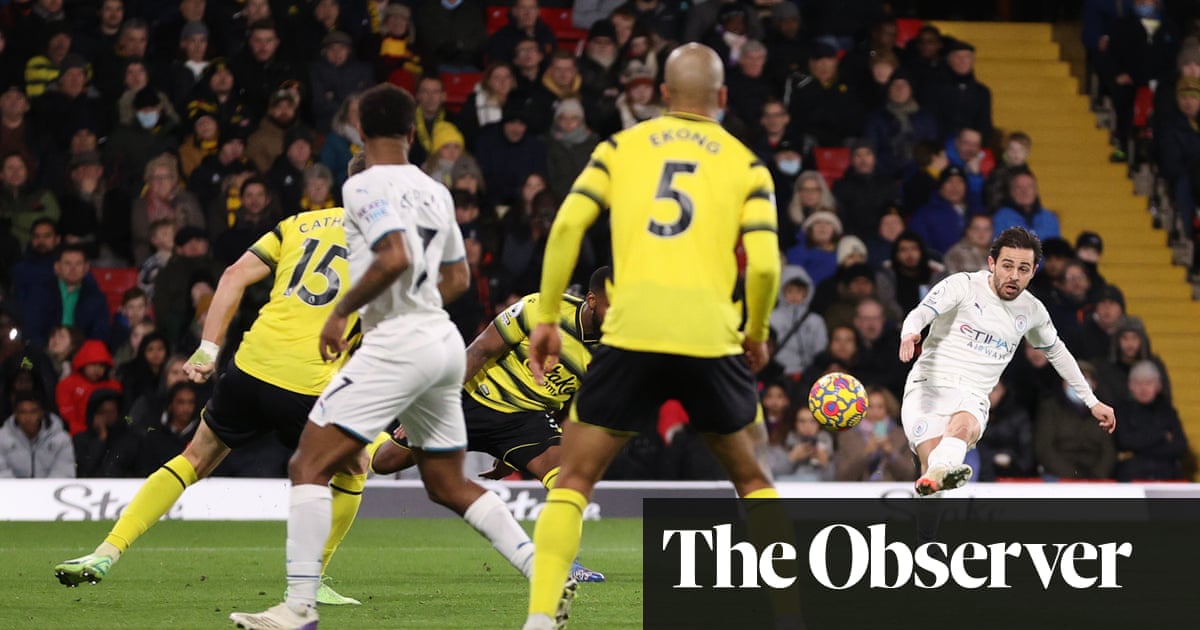 It was probably fair to say history was against Watford and so, unsurprisingly, was the present day. In their 13 previous matches in all competitions against Manchester City, they had lost 13, shipping 50 goals and taking some hidings along the way – an 8-0 and a couple of 6-0s, including the one in the 2019 FA Cup final.

This was another pummelling in all but the scoreline, City’s superiority stamped across every facet of the game and given what had gone before, it felt faintly ridiculous that after the substitute, Cucho Hernández, had reduced the deficit to 3-1 in the 74th minute, Joshua King blew a glorious chance for 3-2.

What had happened before was akin to a procession as City surged to the top of the table, taking advantage of Chelsea’s defeat at West Ham.

Bernardo Silva, the game’s outstanding performer, produced the moment of the match, cutting inside from the right and bending a wonderful shot high into the far corner for 3-0. He had previously added to Raheem Sterling’s close-range header as City marched on. They are unbeaten in 19 fixtures in all competitions.

In the numbers game, there was one that went against the grain before kick-off. In nine previous Premier League games against City, Claudio Ranieri had won eight and drawn one. Yes, really.

It had felt like the tallest of orders to ask for that continue, not least as the Watford manager contended with a host of injury problems. Pep Guardiola, meanwhile, had the luxury of being able to make five changes from the line-up that won at Aston Villa in midweek and City could have been four or five up after 10 minutes.

Their dominance at the outset was almost indecent, Watford chasing shadows as City manipulated the ball with familiar smoothness – Phil Foden and Ilkay Gündogan, two of the returning players, to the fore. If they were not bad options to reintegrate, then neither were Kyle Walker, Aymeric Laporte and Jack Grealish.

Laporte had a header cleared off the line by João Pedro from a Foden corner on two minutes and Watford felt the burn when Sterling opened the scoring moments later. The home team were fortunate the early damage was not much heavier. It would have been had Grealish been more decisive.

Playing as the false 9, Grealish headed another Foden corner straight at Daniel Bachmann when completely unmarked before taking a poor first touch after more probing by Foden. Sterling also extended Bachmann with a curler.

The move for the breakthrough was ignited by the excellent Silva, whose crossfield pass was made to measure for Foden. When he crossed, Sterling was all alone to head home.

Guardiola asked Silva and Gündogan to wander up front whenever they saw fit and they did so regularly, the first half becoming an ordeal for Watford, who could not cope with City’s speed of movement and thought. Apart from an Emmanuel Dennis shot on 17 minutes, which Ederson saved easily, it was one-way traffic. Watford came to yearn even the briefest sequence of possession. They barely got that.

Silva scored the second from a tight angle, picking up the scraps after initially releasing Gündogan and seeing Bachmann get out to block. Before that, Grealish was denied by the goalkeeper with a deflected shot and lifted another one high and after it Foden sliced when he should have done better.

What makes this City team so ruthless and dispiriting to play against is their hunger out of possession. It did not happen very often here but when it did, they rushed men around the ball, showing their physicality in the challenge, with Rodri most prominent.

Ranieri switched to 4-2-3-1 for the second-half, with Pedro now in the No 10 role, but City continued to create chances at will. And how about the show of strength when Guardiola introduced Riyad Mahrez and the fit-again Kevin De Bruyne on 67 minutes.

Grealish did not look happy to come off. He had just skimmed the crossbar with a deflected shot – it was not his night – but by then City were 3-0 up, with Silva having picked out the far, top corner.

Sterling also worked Bachmann, Foden hit the near post, Gündogan shot high and it was really was a shock when the Watford substitute, Hernández, beat Ederson at the second attempt after his first shot crashed back off the far post.