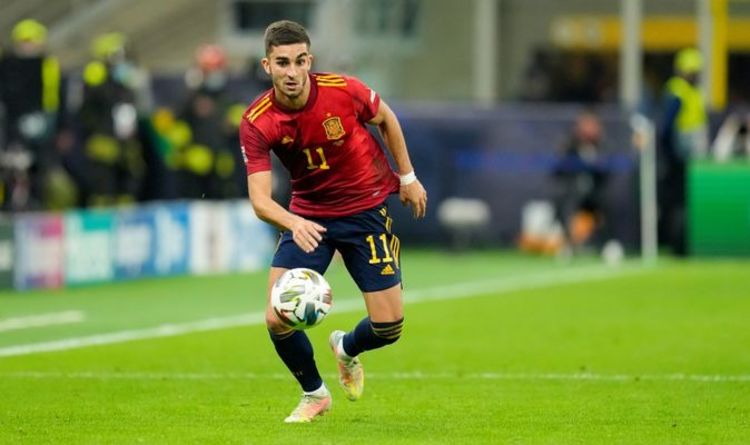 Interest in Ferran Torres' prospective move from Manchester City to Barcelona has ramped up in recent weeks, amid rumours that a deal is close to being wrapped up for the Spaniard to return to his homeland. But after being offered four players by Barca - including ex-Liverpool star Phillipe Coutinho - City have responded to demand two different players if they are to do a cash-plus-player deal.

Torres has starred for City over the past year-and-a-half since his £22million move from Valencia in 2020, making 43 appearances and scoring 16 goals in the process.

The Foios-born forward has only played in four Premier League matches this season, scoring twice against Arsenal before picking up a foot injury in late September.

Barcelona have been credited with an interest in the winger, with the Catalan club going through a rebuilding phase under new manager and club legend Xavi.

Yet the Catalan club's poor financial position may see them in danger of not being able to complete a deal - instead offering Coutinho amongst others to the English champions.

Ferran Torres has been linked to Barcelona (Image: GETTY)

The report by Marca states that chiefs Mateu Alemany and Ferran Reverter travelled to Manchester last week in order to arrange a deal, despite their lack of funds - with president Joan Laporta claiming the club will have to sell to buy.

City value Torres at around £60m, although Barcelona are only willing to pay £38m for the talented youngster.

As a result, the Blaugrana are reportedly trying to offer up several players to bring City's asking price down.

Coutinho is one of those, alongside Samuel Umtiti, Clement Lenglet and exciting French winger Ousmane Dembele.

Pedri has been linked with a move to City in a swap for Ferran Torres (Image: GETTY)

"You have to go to Txiki [Begiristain] or the agent of Ferran Torres, or Barcelona, I’m not the guy to talk about it. In six years I don't talk about these issues.

"We call some players from other clubs when we are interested, so I completely understand. I would prefer not but it is what it is.

"We cannot control that and it depends on many, many things."

City take on Watford on Saturday as they look to keep pace with Chelsea at the top of the Premier League table.