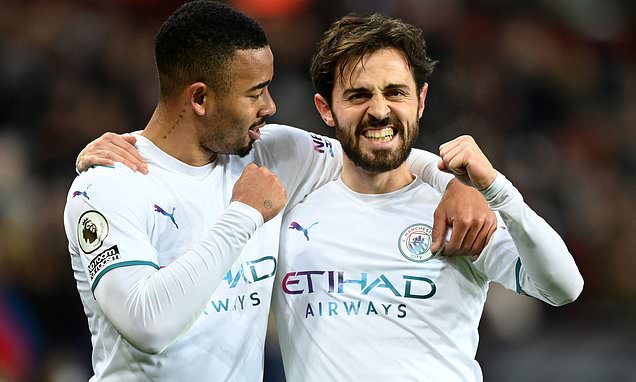 Bernardo Silva's electrifying Manchester City season continued on Wednesday with a brilliant goal in the 2-1 win away to Aston Villa.

Silva scored a sumptuous volley for City's second at Villa Park and it turned out to be the decisive goal as they kept well in the title race alongside Chelsea and Liverpool.

Pep Guardiola was effusive in his praise over the Portugal international in his post-match remarks, hailing him as the best in the Premier League.

It marks a big turnaround for Silva who, as Sportsmail reported in August, was being lined up as part of a swap deal to get Tottenham to sell City Harry Kane.


The deal never came to fruition and City are now reaping the rewards of keeping the playmaker.

Guardiola said: 'He is the best, and he was the best three seasons ago when we won the title with 98 points.

‘He has a special ability to do what he wants with the ball.

‘If you watch him two or three seasons ago, you will see the same player you are seeing now.

'The goal was really good, both the pass and the finish. He is a player on another level, in all senses.'

City are second in the Premier League with 32 points, one ahead of Liverpool and one behind leaders Chelsea.

They return to action on Saturday away to Watford.