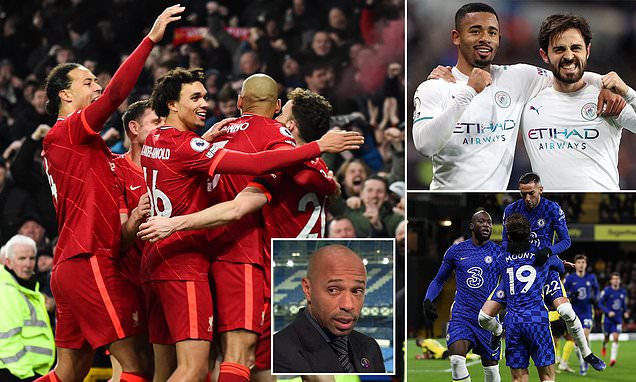 Thierry Henry has hailed Liverpool as being 'on a different planet' following their rampant 4-1 win over Everton and insisted they 'can already put four on the board' against Wolves.

The derby has not been the Reds' only four-goal feat this season as Jurgen Klopp's side put four past Southampton and Henry's former side Arsenal too.

Arsenal legend Henry praised the Liverpool side as a whole for their intensity and pressure, while admitting title rivals Chelsea and Man City are also 'in a rhythm'.


'For me they are on a different planet. Not just them but the other two (Chelsea and Man City) at the top who are in a rhythm,' he told Amazon Prime.

'At one point everyone in the crowd they (Everton) could do something and when they gave that gift unfortunately for the captain, Seamus Coleman, it all went south.

'But they are on a different planet, four against Arsenal, four against Southampton, four tonight, they're playing Wolverhampton they can already put four on the board.

'The intensity they have on and off the ball, pressure at the end of the game playing with intensity is amazing.'

Ex-Liverpool winger Steve McManaman echoed Henry's praise but insisted he expected his former side to dominate over their neighbouring rivals.

'Liverpool were coming into this form in great form, Everton weren't,' he said.

'Liverpool coming into the game scoring three on average, Everton struggling to score.

'So scoreline 1-4. That's what we were expecting, we wanted it to be closer but Liverpool are just far better than them. They outclassed them.

'The derby atmosphere was there till half-time. But then Liverpool calmed it down and the opportunity came, goal, goal.'

Liverpool's win kept the pressure on top two Chelsea and Manchester City in what has become a three-way race for the Premier League title as just one point separates the three sides.

The Reds travel to Wolves in their next outing on Saturday, just two points off leaders Chelsea and will look to inflict a similar winning margin to bring them closer to the top of the table.