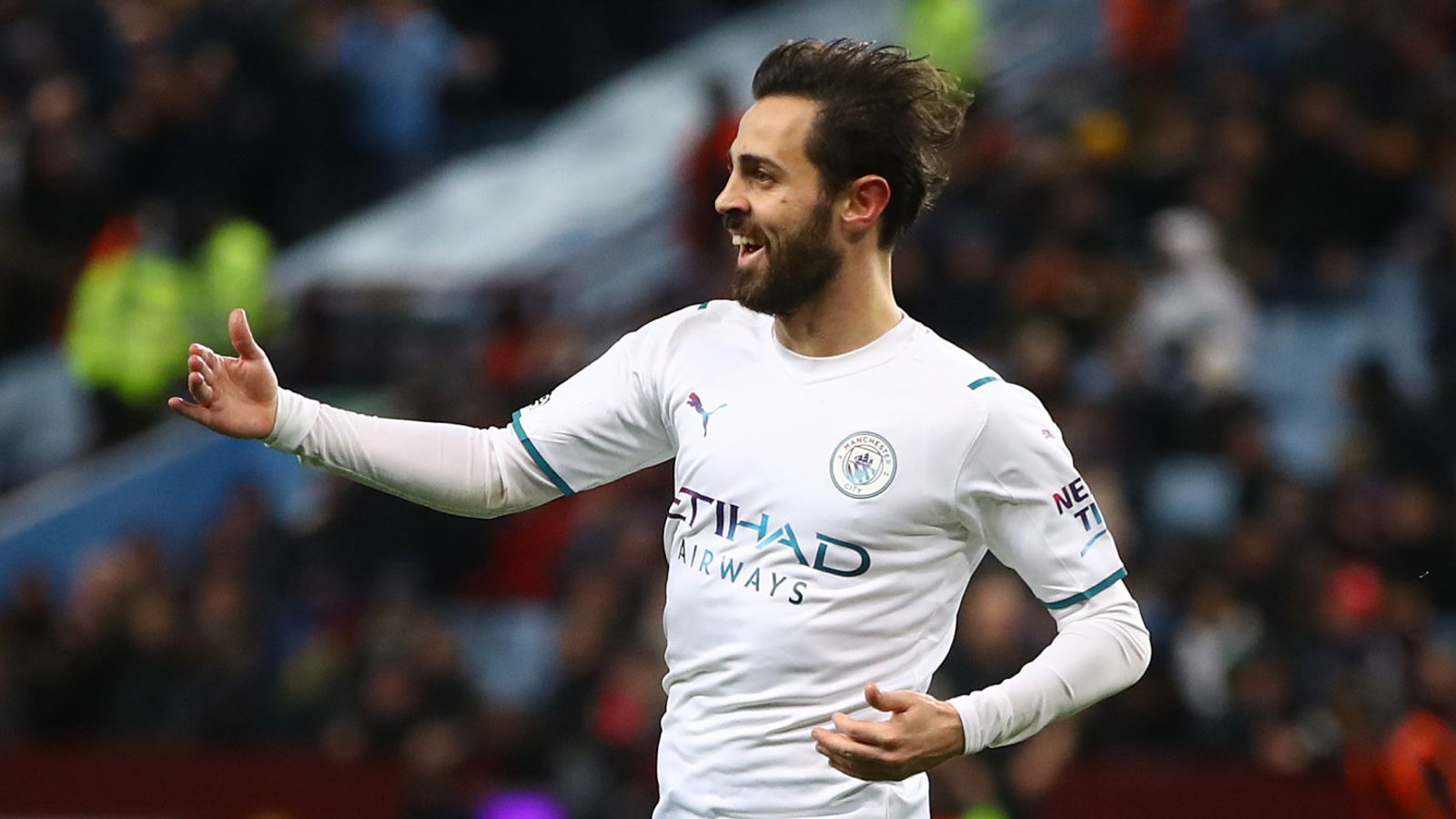 The midfielder's sensational volley and Ruben Dias’ opener earned City a 2-1 win on Wednesday. Ollie Watkins pulled a goal back for the hosts, who made the champions work in the second half, but they could not find a leveller.

City sit second in the Premier League, a point behind Chelsea and one ahead of Liverpool and Guardiola heaped praised on Bernardo for helping them maintain the pace.

“He is the best," Guardiola said. "He was the best two or three seasons ago. He was the best then too. He has a special ability to do whatever he wants with the ball. Against a good goalkeeper it was an incredible finish.

“You have to go back to when we won with 98 points, review the videos, you will see the same player like this right now.

“To come here against this opposition, I was really impressed with who they are, and to be able to beat them is an incredible step for us.

Jack Grealish made his first Villa Park return since his £100m move to City as a late substitute and was given a mixed reception by the home fans.

Guardiola added: “He gave us what we needed. He was perfect.

"His touch was a new quality and every time he took the ball he didn’t lose the ball."

FREE TO WATCH: Highlights from Manchester City's win against Aston Villa in the Premier League

City dominated the first half and Dias deservedly opened the scoring when he fired in Raheem Sterling’s cutback after 27 minutes.

Villa struggled with the visitors’ slick passing and failed to make a dent before Bernardo made the points safe two minutes before the break.

It was another goal to add to City’s scrapbook under Guardiola as Riyad Mahrez and Joao Cancelo played their way out of danger on the edge of their own area and found Fernandinho. His first-time pass sent Gabriel Jesus clear to cross for Bernardo who slammed a brilliant volley into the top corner from 18 yards.

Clinton Morrison on Soccer Special: "In the second half, Aston Villa were good. Whatever Steven Gerrard said to them at half-time, there was a big response and they got back into it thanks to Ollie Watkins' well-worked goal. "However, first half, Manchester City were breathtaking. They are an outstanding football team. When they get it right and play the one or two touch football, it's so brilliant to watch.

Gerrard: It was a terrific reaction

Villa needed a response and got one two minutes into the second half when Watkins fired Douglas Luiz’s corner in off the post.

It gave the hosts belief and Steven Gerrard’s side improved dramatically, refusing to let City coast to victory.

Jesus should have done better than to slice over after controlling Bernardo’s cross before Ederson ensured the points 15 minutes from time. Emi Buendia slipped in Carney Chukwuemeka who only had the goalkeeper to beat but shot too close to the Brazil international, who turned the ball over.

“It terms of the second half I thought we were outstanding. We scared City because we were so close to taking something from the game,” said boss Gerrard after his first defeat in charge.

“It was a terrific reaction from the players and I told them not to leave this stadium with their heads down at all.

“City started very so well, we have to respect what we are playing against but I thought we were in a bit of a shell for 10-15 minutes.

“It’s on me to prove to the supporters I am the right man and there is hope and belief we can move forward and have successful and good memories together. It was an acid test and a true reflection of where we are and where we want to get to.”