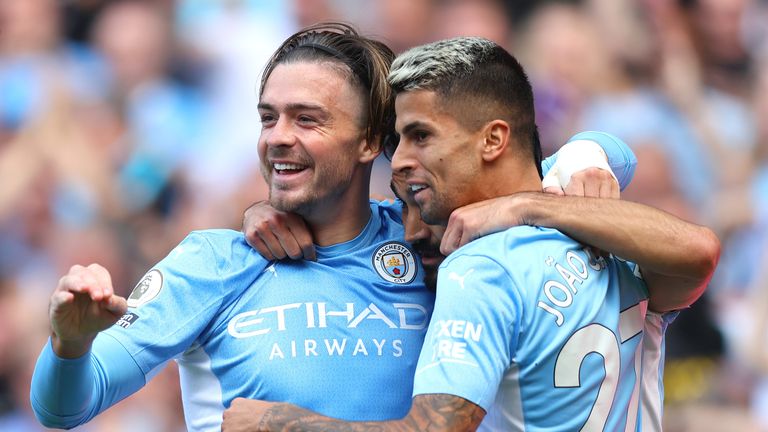 Team news, stats and prediction ahead of Aston Villa vs Man City in the Premier League on Wednesday; kick-off 8.15pm.

Aston Villa are again without Danny Ings as they host Manchester City in the Premier League.

England striker Ings has had a minor setback on an unspecified injury which kept him out of Saturday's 2-1 win at Crystal Palace, and Villa boss Steven Gerrard says his recovery has been put on hold "for a few days".

Trezeguet (knee) and Bertrand Traore (thigh) remain out, with the former set to return to U23 action next week and Gerrard hopeful that the latter will be back in training before Christmas.

Former Villa midfielder Jack Grealish is hoping to prove his fitness to face his old club.

Man City's record signing will be given a fitness test along with team-mate Phil Foden after both missed recent games with knocks.

Kevin De Bruyne is not ready to return after suffering coronavirus, while defender Aymeric Laporte is suspended and Ferran Torres is a long-term absentee.

Follow Aston Villa vs Man City in our dedicated live match blog. Highlights will also be published on the Sky Sports digital platforms and the Sky Sports Football YouTube channel after full-time.

FREE TO WATCH: Highlights from Aston Villa's win against Crystal Palace in the Premier League.

FREE TO WATCH: Highlights from Manchester City's win against West Ham in the Premier League.

I think Manchester City will win the Premier League this season.

But, I am happy to take them on at a very skinny 1/3 with Sky Bet here. Those odds imply there is a 75 per cent chance of a City win. I would have it closer to 60 per cent, so, we must act on that margin and back a positive Villa result.

Steven Gerrard has taken it back to basics. He has tightened them up no end. From averaging 1.8 goals against per 90 minutes this season under Dean Smith, Gerrard has closed the door, conceding just once in his two victories - an impressive defensive output backed up by an expected goals against figure of just 0.7 per 90 minutes and an average of just six shots conceded per game.

Stopping Manchester City will be Gerrard's toughest managerial challenge of his career so far. He might just be capable of it.

Steven Gerrard has urged Aston Villa supporters to give Jack Grealish a warm reception if the Manchester City midfielder plays against his boyhood club on Wednesday, after leaving Villa for £100m in the summer.

The way to frustrate and malfunction this Man City machine is to defend deep, defend with expert organisation, possess a quality goalkeeper and players that can break quickly on the counter-attack. There are plenty of ticks to give Aston Villa hope.

Plus, there is plenty of relevance for the two fixtures between the teams last season where City won 2-1 and 2-0, however, both encounters were far from a cakewalk for Pep Guardiola's side with a debatable offside call going against Villa at a key point late in the game of that 2-0 win at The Etihad.

Villa Park. Under the lights. Raucous atmosphere. I am with them.

Manchester City manager Pep Guardiola says Jack Grealish must reach his best level this season after joining the club for a British-record £100m transfer in the summer.