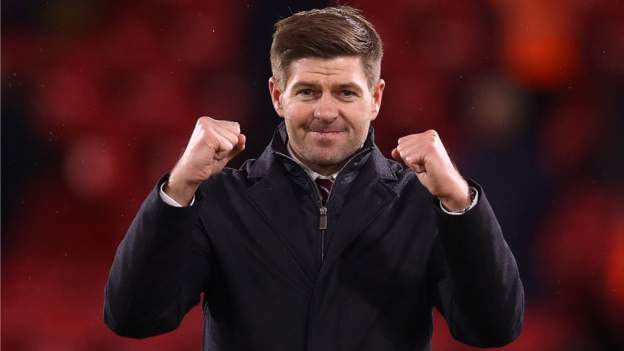 Jack Grealish could be involved against his boyhood club Aston Villa, who he left in a £100m deal in the summer

Aston Villa forward Danny Ings is unavailable on Wednesday because of a niggling injury.

He joins Bertrand Traore and Trezeguet on the sidelines, while Tyrone Mings and John McGinn are a booking away from triggering an automatic one-match ban.

Grealish and Foden have returned to training but De Bruyne is still feeling the after-effects of Covid-19.

Aymeric Laporte is suspended so John Stones is likely to start.

With two wins from two games it is so far, so good for Steven Gerrard as Aston Villa boss - but this is by far his toughest test yet.

Manchester City go to Villa Park after a very good week that has seen them beat Everton, Paris Saint-Germain and West Ham - and all without Kevin de Bruyne, Phil Foden or Jack Grealish, who have all been ill or injured.

De Bruyne is probably still out, Grealish might miss his return to Villa Park and Foden remains doubtful and I just wonder if that gives Villa a sniff of a shock result.

If Grealish and Foden are back, I'd be more confident of a City victory. Without them, Villa might nick something, especially because their tails are up at the moment.

Choose your Aston Villa formation and starting line-up. It's up to you how to approach it - you could go for the team you WANT the boss to pick or the one you THINK he will.

Choose your Manchester City starting formation and line-up. It's up to you how to approach it - you could go for the team you WANT the boss to pick or the one you THINK he will.