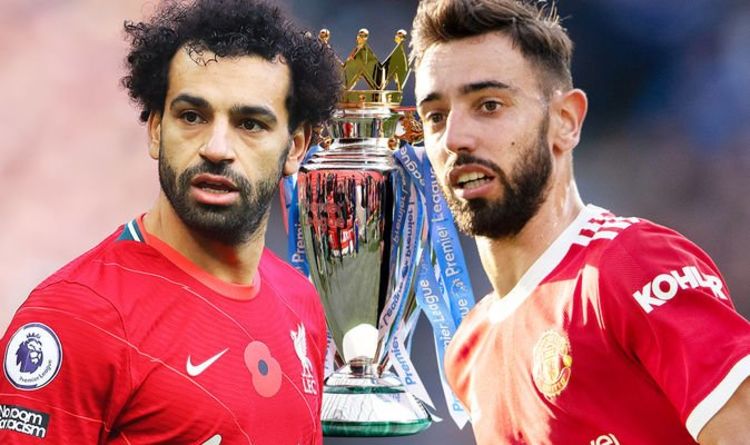 Mohamed Salah and Bruno Fernandes are just two of the Premier League stars up for this year's Reach PLC Fans' Footballer of the Year award that will see you, the supporters, vote to crown the best player of 2021. The pair have been selected to head up a seven-man shortlist of the game's biggest talents who have excelled for club and country over the last 12 months.

Salah pipped the likes of Jack Grealish and Marcus Rashford to claim last year's prize and will be going for glory once again this time around.However, the Egyptian maestro will be facing stiff competition from a number of the Premier League's highest-profile stars.Although many voters will choose the player that they believe has been objectively better than the rest, you can define 'Footballer of the Year' in whichever way you would like.You may decide to vote for the player who has moved you from your seat the most, one who has excelled off the pitch as well as on it, or simply your club's most important star.

Express Sport takes a look at each of the seven nominees for this year's award, with the eventual winner set to be announced next month.

Salah and Fernandes are just two of the nominees for this year's award (Image: GETTY)

Salah could be among the favourites to be named Fans' Footballer of the Year after an incredible 12-month period with Liverpool.The 29-year-old has racked up 35 league goals since the beginning of 2021 and is arguably the world's best player on current form.He also played a significant role in helping Liverpool to achieve a third-placed finish last season after an initially poor start to their Premier League campaign.

It remains to be seen whether Salah will pick up the award for the second year in a row, but it seems as though he will definitely be near the top of the list.

Fernandes has firmly established himself as one of the Premier League's very best midfielders since joining Manchester United in January 2020.He has enjoyed a stunning year with the Red Devils despite failing to win a trophy, ending last season as the club's top scorer in all competitions.The former Sporting maestro was unlucky to miss out on last year's Fans' Footballer of the Year award but could be primed to claim the prize at the second time of asking.

He has already chipped in with four goals and 10 assists since the beginning of the current campaign and will be hoping to stay firing on all cylinders to help United rescue their fading hopes of a top-four finish over the coming months.

Manchester City spent more than £60million to land Dias from Benfica last summer and the 24-year-old has turned out to be an inspired purchase in the months since.He was crucial in helping Pep Guardiola's side to Premier League glory last season, picking up the division's official Player of the Year award in the process.Dias has maintained his pivotal role for City this time around and has already earned seven clean sheets in the league to aid his side's ongoing title defence.

He looks set to keep his place as one of the world's finest defenders for the foreseeable future and will be aiming to keep up the good work at City between now and the end of the current Premier League season.

Foden is the second of three City players to have been nominated for the Fans' Footballer of the Year award and for good reason.The 21-year-old has finally stamped his authority on proceedings after spending a couple of seasons on the fringes and is now a fully-fledged starter at the Etihad Stadium.He has also earned a regular place in the England side and impressed with the Three Lions at Euro 2020 over the summer.

The world has been Foden's oyster for some time, but the City youngster now finally looks to be realising his incredible potential and will only keep improving as the years go by.

De Bruyne has also been in fine form this year (Image: GETTY)

De Bruyne is regularly spoken about in the same breath as football's very best and has picked up his fair share of individual accolades over the years.He has registered 14 goals and 16 assists for City in 2021 and pulled the strings with ease for Belgium at the Euros despite being forced to play through an injury.The 30-year-old has consistently performed at the highest level for club and country and has been nominated for this year's Ballon d'Or as a welcome reward for his efforts.

He will also be among the frontrunners to clinch the title of Fans' Footballer of the Year, but it remains to be seen whether he will manage to pip the likes of Salah and Fernandes to the coveted prize.

Jorginho is another nominee to double up on this year's Ballon D'Or shortlist after a glittering campaign on all fronts with Chelsea and Italy.The former Napoli man won his first Champions League title with the Blues last season before achieving continental glory on the international stage at the Euros.He has been the heartbeat of Chelsea's current side for some time, with his ability to keep things ticking in the middle of the park only being amplified under the guidance of Thomas Tuchel.

The German boss will be counting on Jorginho to maintain his own lofty standards over the course of this season as Chelsea go in search of their first Premier League triumph since 2017.

Rice is arguably the finest English player outside of the Premier League's 'big six' and is already knocking on the door to be considered among the world's very best in his position.He played every minute for his country at the Euros over the summer, serving as one of two midfield lynchpins alongside Kalvin Phillips in the engine room.The former Chelsea academy star has also emerged as a crucial asset for West Ham United and is reportedly wanted by some of Europe's biggest clubs as a result of his age-defying influence on proceedings at the London Stadium.

The 22-year-old, like Foden, is very much here to stay and will be looking to keep up the good work this season as the Hammers aim to follow up their strong start to the campaign with a remarkable top-four finish.