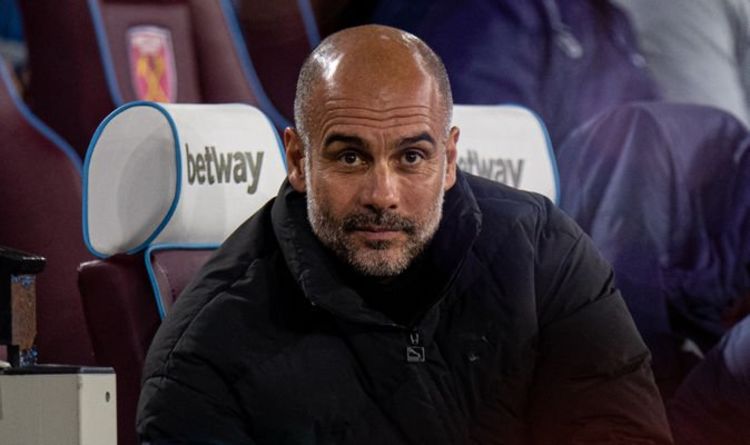 Manchester City boss Pep Guardiola reportedly discussed business with Barcelona officials Mateu Alemany and Ferran Reverter during a dinner in Manchester last week. With players unsettled both at the Etihad and out in Spain, two stars were discussed with an eye towards a mutually beneficial resolution.

City's Premier League title charge was given a boost this weekend when they battled to a 2-1 victory over West Ham and Chelsea dropped points.

That leaves City one point off the top of the league, but despite their success, not everyone is a happy camper under Guardiola.

Raheem Sterling is reportedly frustrated with his game time and could soon force through a move away, but Ferran Torres is supposedly Barcelona's primary interest.

Pep Guardiola could do business with his old club in January (Image: GETTY)

Reports indicate that the 21-year-old has already informed Guardiola of his desire to head to the Camp Nou, where the City boss spent four successful years as manager.

And according to Mundo Deportivo, the winger came up in conversation during a meeting between Guardiola and Barca officials last week.

Thankfully for City fans though, their prospective negotiations could see them landed with a new youngster as Nico Gonzalez also crept into the discussion.

Guardiola allegedly flirted with the idea of luring in Gonzalez a few years ago, but the midfielder has instead cut his teeth out in Catalonia.

Nico Gonzalez has been a regular fixture for Barcelona this season (Image: GETTY)

So far, Guardiola's side have attacked the season without a senior striker in their ranks, but many claim that they could be even more dominant with an orthodox No.9 in the box.

They were heavily linked with Harry Kane during the summer, but Tottenham's quoted price tag, believed to be around £200million, proved a stumbling block.

In light of the Englishman's poor Premier League form this season, it remains to be seen whether Spurs will re-evaluate their stance, or whether City would even revisit their interest.

Another option for the City hierarchy is to hold fire in an attempt to make a lucrative move for Erling Haaland when his release clause becomes active in the summer.