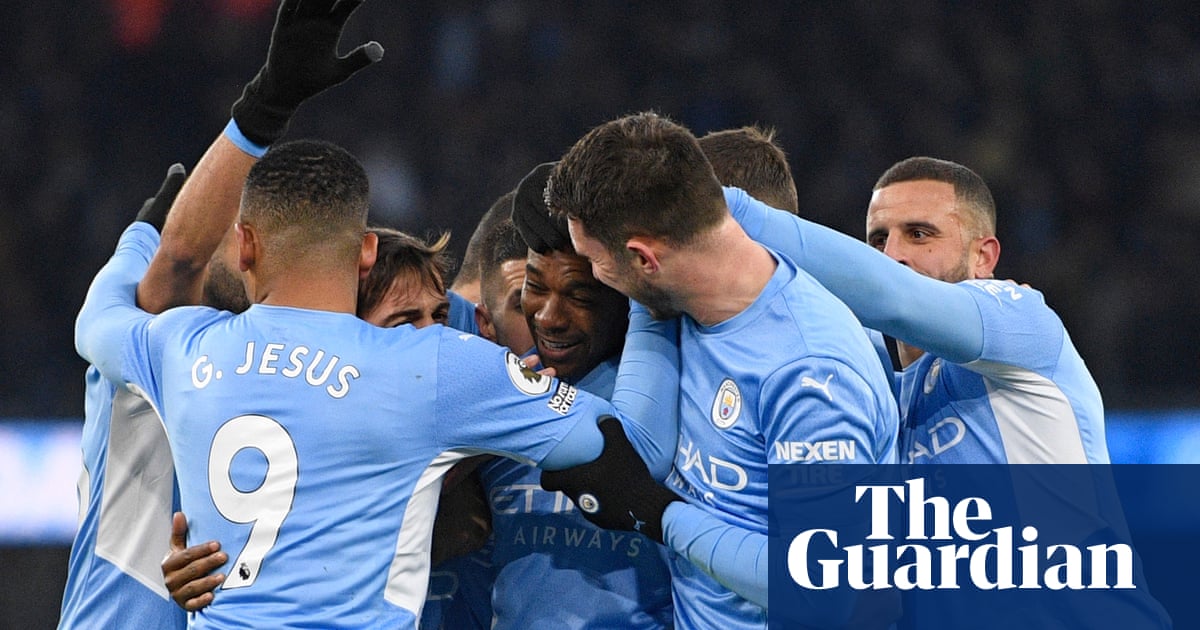 This was a muted affair with an exciting finish in which Manchester City kept West Ham on a long lead and twice pounced expertly via Ilkay Gündogan and Fernandinho to claim the points. The strikes were flashes of high quality from the champions whose control, once they settled, will please Pep Guardiola. But despite their control, they needed Fernandinho’s goal, as Manuel Lanzini struck four minutes into stoppage time.

Gündogan’s finish came on 33 minutes and from this juncture City were hardly troubled by David Moyes’s men until the very end. As the congested winter schedule begins there was also an economy of effort that should be welcomed by a manager whose squad was depleted for this 13th Premier League game of the campaign that ended with his team in second place.

Injury ruled out Phil Foden and Jack Grealish, as Guardiola named only eight replacements for a meeting with the side three points and one position behind them and which was decorated by a snowfall that made for a light dusting at kick-off.

If the opening half would end close to a white-out due to the conditions, City’s feather-like defence was first exposed by Michail Antonio who shrugged a tentative Ruben Días aside, moved into the area along the left, and crossed but no teammate could finish. Seeing this, Kyle Walker decided direct action at the other end might wake City via a shot that beat Lukasz Fabianski but not the goalkeeper’s right post.

Next was a sequence of pinpoint precision that involved Walker, Gündogan and Gabriel Jesus, before the latter’s radar proved awry when trying to return the ball to Gündogan near West Ham’s goal.

By now the snow was falling constantly and when Antonio next received it was along the right and this time Aymeric Laporte, preferred to John Stones to partner Dias, was bullied by the No 9 and City were grateful to escape.

Both rearguards needed to tighten. At City’s first corner – pinged over by Gündogan – Laporte was allowed to float into the air and head marginally over by a sleepy West Ham. Moments later, another warning: this time Riyad Mahrez skipped in and drilled home, but it was ruled offside.

The pace of the contest had hardly nudged above a trot and was pocked by heavy touches and a clogged midfield. Saïd Benrahma and Gündogan each took aim from 20 yards out with no success and, later, Sterling’s curler concerned Fabianski who was happy to see the ball sail wide.

The Hammers’ forward forays were more sporadic than their hosts yet seemed, at this point, to always threaten. Aaron Cresswell’s attempt to beat Ederson directly from a free-kick was deflected out for a corner, which the left-back took. He found Declan Rice, whose return pass was crossed in again but up went the flag.

City, who had slumbered, finally jolted into life. Mahrez fielded a long ball on the right, cut inside and fed a lurking Gündogan who could hardly miss from inches out. Ben Johnson, exposed here by Mahrez, saved his side when those in blue next attacked, blocking Jesus’s shot off the line with Fabianski beaten.

As the interval approached the pitch markings were becoming tricky to see. Mahrez, too, might have had his vision blighted when smacking a shot off the left post but as the second half commenced the snow had abated and the pitch cleared, following an extended break.

This benefited City, who were coasting, and was underlined by an early corner that pinned their visitors back. The Hammers, as the second half went on, continued to be pummelled by some percussive passing. Better from them was a move that had Johnson hitting in a cross that Laporte steered out for a West Ham corner.

It remained, though, a canter for City. Antonio broke and ceded possession – West Ham did this too much – and suddenly Sterling was skating clear, clipping the ball over for Jesus who should have doubled the lead. The team from east London were being toyed with in a manner which informed them of their status.

Rice, though, did keep Ederson honest with a 30-yard piledriver the Brazilian punched away before Gündogan, at the other end, had Fabianski sliding on the turf to keep the deficit to one. The keeper could do nothing about Fernandinho’s late second. On as a substitute, the midfielder sealed the win with a slide-rule finish, while Lanzini’s goal was some reward for West Ham’s efforts.