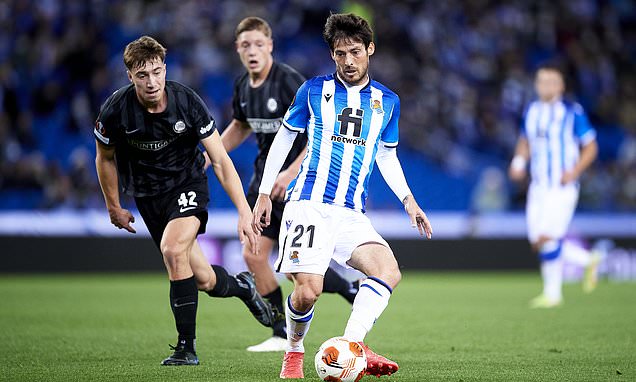 Alexander Isak is holed away in an office deep inside Real Sociedad's Zubieta training base when he leans back in his chair to ponder a question from Sportsmail.

Just how influential has the arrival of a 35-year-old David Silva been in breeding a winning mentality?

Many in Imanol Alguacil's squad find themselves 25 and under and in Silva, an elder statesman who helped build the Manchester City juggernaut many see today, La Real picked up a diamond.

Isak, just 22, looks across to team-mate Alexander Sorloth, also sat in on this chat, before trying to find the words to sum up Silva.


'I wouldn't say he surprised me because I think we all knew the level he had and what he could provide for the team,' the Swedish striker said.

'It is really nice to see the way he works and how professional he is with the team.

'He is very down to earth, so all of us can learn a lot from a player like that.'

Sociedad finished fifth last season to win a spot in the Europa League; the challenge this year is to go one better and crack that top four.

For Sorloth, Silva will be key in guiding this side, sat second ahead of Sunday's visit to Espanyol, back into the Champions League for the first time since 2013.

'He sets an example,' Sorloth explains.

'In his work and in his games you can see he is so calm on the ball all the time, it is like he has all the time in the world, especially in tight spaces.

'For me it has been really good to see his work ethic - he still looks hungry.'

Silva, 35, boasts bags of experience and returned to Spain to bring his winning mentality

In defeat to Monaco seven of the starting 11 are 26 and under and Silva is the steady hand at the tiller that helps slow the game down and allow La Real to dictate the pace.

Silva will miss Sunday's meeting with Espanyol with a muscular injury picked up in Thursday's Europa League defeat to Monaco but his work is as vital off the pitch as it is on it.

Since the turn of millennium, Silva has 15 domestic trophies to his name. Sociedad have two, one of which came with the midfielder famously nicknamed 'Merlin' during his days in East Manchester.

Both Isak and Sorloth are reluctant to get swept up in a barrage of questions about their title credentials as they go toe-to-toe with Real Madrid deep into November.

Sorloth, in on loan from German side RB Leipzig, wants to see the 2019-20 Copa del Rey success act as a springboard for a young and ascending side.

'We have seen other teams that when you win a trophy, the whole squad and the whole club sees that is possible, it adds motivation to the club and hunger,' the Norwegian said.

'The club gets better, more motivated, gets better players, so it can be the start of something.'

Asked if with Barcelona, who are slowly improving under new boss Xavi, and champions Atletico Madrid's struggles have opened a door, he added: 'It is important to not look too far ahead but everyone has noticed it [La Liga] is more open.'

Much of how far Sociedad can go hinges on Isak.

For a player who is only 22 he has been in the spotlight long enough to know how to handle it.

A prodigy back in Sweden with AIK he was quickly dubbed the 'next Zlatan Ibrahimovic', a title he can now brush off. That's no knock on Ibrahimovic, more that Isak is comfortable in who he is as a player.

That light dimmed when a move to Borussia Dortmund failed to ignite and with just one goal in 13 games he packed up and headed for the Basque region two years ago.

With 1.64 goal attempts a game in LaLiga this season, and 8.55 'key passes' per 90 minutes, Isak's game is rounding out as many predicted it would.

'It is a mix of being in a country where football fits my qualities and being at a club that really believes in me and bought me with the intention of making me a top player,' Isak said.

'Spanish football benefits me more because I am a player who likes to touch the ball and combine with my team-mates.

'In Spain there is more playing, I wouldn't say tiki-taka, but more playing with the ball and it is more technical.'

Just three goals in the league this season shows an obvious area of improvement but much of what the Swede does won't show on the stats report.

'I have had two very good years not only on the pitch but also outside it,' he added.

'I feel very good in this city, in this country and I am very happy to be here.'

Seventeen goals is his target to beat and there is a growing sense in San Sebastien that a maturing Isak is still waiting on an explosion this season.

But in the meantime, there is no better mentor than Silva to teach him what it means to be a serial winner.