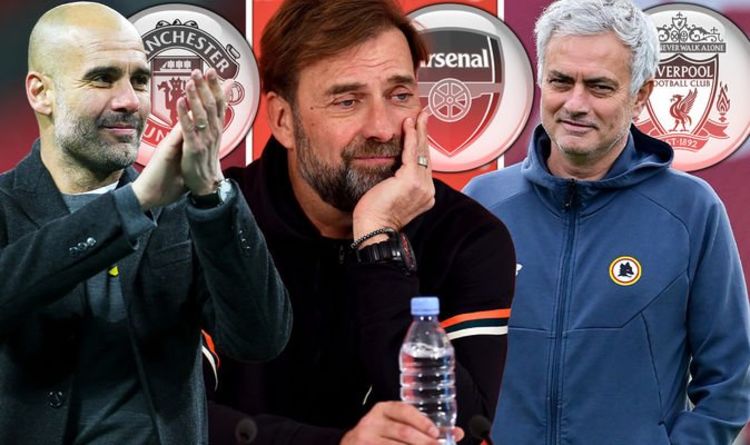 The Premier League has played host to the best managers in world football over the years with jobs at Liverpool, Manchester United, Chelsea and Arsenal all being regarded as some of the most enticing. Arsene Wenger and Sir Alex Ferguson's reigns at Arsenal and United respectively will go down in history.

The new kids on the block soon arrived though as Jose Mourinho led a revolution at Chelsea before the likes of Pep Guardiola and Jurgen Klopp arrived at Manchester City and Liverpool.

Fans up and down the league have had mixed emotions towards their respective managers over the years.

United have struggled since Ferguson's retirement while Arsenal are similarly in a rebuilding stage.

Contrast that with life at City and Liverpool, where both Guardiol and Klopp are established icons among supporters.

The Premier League in an alternative universe (Image: GETTY)

If only the Red Devils had followed through with Guardiola's interest in the Old Trafford job.

Back in 2014, Guardiola admitted in 'Pep Confidential: The Inside Story of Pep Guardiola’s First Season at Bayern Munich' that he was keen on one day managing United.

“I like this atmosphere. I could see myself coaching here one day," he said.

Two years later and Guardiola did end up moving to Manchester, only to arch-rivals Manchester City.

That same year saw Mourinho take charge of United but the blue side of Manchester have grown in stature under Guardiola's guideship while United are without a major trophy since 2017.

Man Utd's Carrick responds to Rangnick appointment ahead of Chelsea

Chelsea have a history with Diego Simeone (Image: GETTY)

City fans are loving life under Guardiola, but Wenger could well have been put in place at the very start of their financial boost.

The Abu Dhabi United Group wanted a big name manager to come in and Wenger was reportedly the original target.

Arsenal were in the middle of a trophyless run, but Wenger rejected City's approach in favour of staying at Arsenal.

Arguably the most controversial of the lot given the level of disdain Liverpool fans had towards Mourinho during his time in England.

The Portuguese coach wound up Liverpool supporters during his first stint at Chelsea.

But Mourinho's first foray into Premier League football could have well come at Anfield after a reported agreement was in place back in 2004.

Mourinho's adviser at the time, Jorge Baidek, revealed in 'Mourinho: Behind the Special One, from the origin to the glory' that Mourinho should have joined Liverpool after holding a meeting with Rick Parry.

Chelsea then seemingly swooped in before going on to become one of the game's greatest managers.