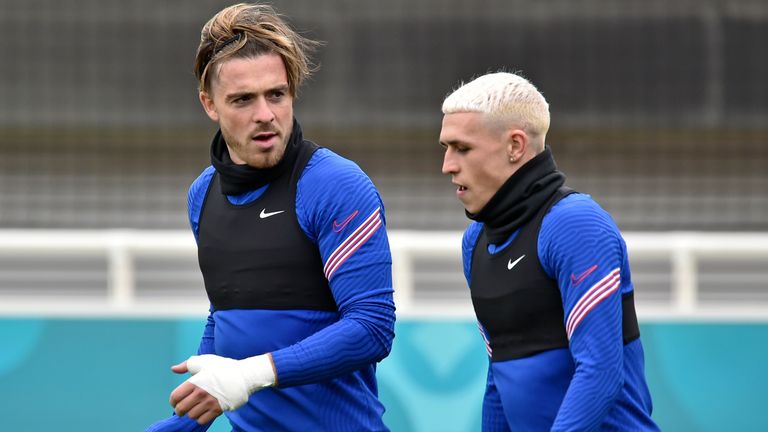 Team news, stats and prediction ahead of Man City vs West Ham in the Premier League on Sunday; kick-off 2pm.

City will give fitness tests to midfielders Jack Grealish and Phil Foden. The England pair have both been sidelined with knocks, with Grealish absent since the international break and Foden missing Wednesday's win over Paris St Germain.

Playmaker Kevin De Bruyne is still out with coronavirus, while winger-turned-striker Ferran Torres (foot) could be absent until the new year.

West Ham boss David Moyes made eight changes to the team for Thursday night's Europa League win away to Rapid Vienna, so is expected to recall his regulars at the Etihad Stadium.

Goalkeeper Lukasz Fabianski, England midfielder Declan Rice and forward Michail Antonio were among those rested but all should be back in contention.

The Irons remain without defender Angelo Ogbonna, who is starting his rehabilitation from a long-term knee injury.

Follow Man City vs West Ham in our dedicated live match blog. Highlights will also be published on the Sky Sports digital platforms and the Sky Sports Football YouTube channel after full-time on Sunday.

FREE TO WATCH: Highlights from Manchester City's win over Everton in the Premier League.

FREE TO WATCH: Highlights from Wolves' match with West Ham in the Premier League.

For a team that have already beaten Liverpool and Man City (on penalties) this season, 9/1 with Sky Bet on an away win does seem a little generous here.

The Hammers are set up perfectly to cause City problems with their rapid ability to counter-attack and get behind defences. Tottenham, Southampton and Crystal Palace have all implemented that strategy this season against City and walked away with a positive result. And, let's be honest, West Ham are streets ahead of those three teams in terms of points picked up over the past two seasons.

Am I brave enough to get involved? It's whether I can forgive the Hammers for stinking the place out at Wolves last weekend. Michail Antonio and Declan Rice looked legless and the usual energetic supporting cast behind the striker lacked their usual creative spark.

There's also the Man City factor to consider. They purred like a Ferrari on Wednesday against PSG.

If they can restrict Neymar, Kylian Mbappe and Lionel Messi to an expected goals total of 0.78 then what chance do Jarrod Bowen and Pablo Fornals stand?

The answer is: I'm not brave enough. City to edge it.