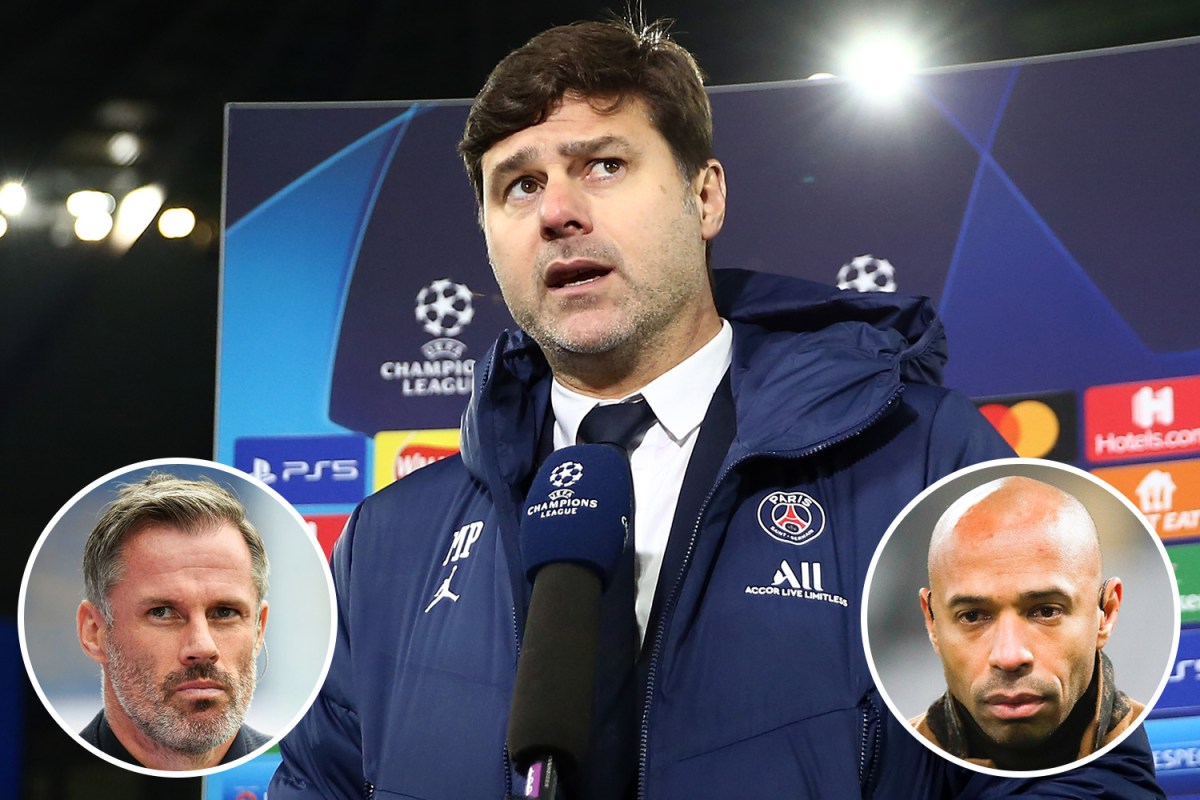 Paris Saint-Germain threw away a lead to lose 2-1 at Manchester City, ensuring they will finish only second in Group A - potentially facing United in the last 16.

Mauricio Pochettino has been urged to join Man Utd 'tomorrow' by Jamie Carragher after PSG lost to Man CityCredit: Getty

Carragher hinted Poch is unsure how to deal with his star forward trio of Messi, Mbappe and NeymarCredit: PA

Pochettino has been hotly-linked with a move to Old Trafford to replace Ole Gunnar Solskjaer, who was sacked on Sunday.

The Argentine claims he is 'happy' at PSG and wouldn't leave midway through the season, but there are rumblings he's not content living in the French capital.

And Carragher has revealed he would join United 'tomorrow' if he was in Pochettino's shoes.

Carragher told CBS Sports: "Pochettino has got to get out of that club.

"If he's got the chance to go to Manchester United... I'd be gone tomorrow.

"I honestly would and it's because of those three stars (Lionel Messi, Kylian Mbappe and Neymar)."

Carragher's co-pundit Henry agreed the PSG front-three - as talented as they are in attack - are leaving the side 'exposed' in defence, with the Ligue 1 champions being caught out at the Etihad.

Henry claimed: "If you want to win the Champions League, you cannot defend with seven players.

"It is impossible, I don't care who you are.

"The full backs are exposed, so it's virtually a three vs one, three vs two on the pitch.

"Team that win titles - and the Champions League even more so - have their front-three facing the ball.

"That way the full backs will feel more comfortable with what's going on behind them.

"But right now they're too exposed. Teams in France cannot expose them, but Man City can.

Messi, Mbappe and Neymar are undroppable for PSG - but their defensive limitations could be a problem against the big teamsCredit: Reuters

Henry reckons Messi, Mbappe and Neymar are too lacking defensively for PSG to thrive in the Champions LeagueCredit: Getty

The Arsenal legend refused to call the Messi-Mbappe-Neymar trio a 'problem' when pushed.

But he did admit they prevent Pochettino from managing the team in his own vision.

Henry continued: "Pochettino is not allowed to be Pochettino at times with that team.

"How do you take (Messi, Mbappe or Neymar) off?

"So he put Angel Di Maria in midfield - but he was exposed and not helping."