Which club has the dirtiest players in the Premier League this season? | Untold Arsenal: Supporting the club, the manager and the team
Untold Arsenal 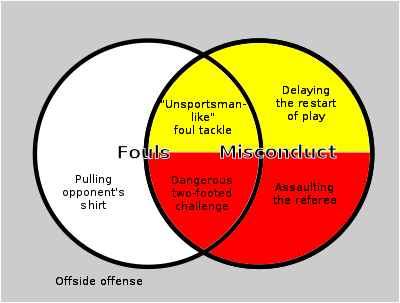 Ten yellows accumulated by week 32 will result in a two-match ban.

Twenty yellows in a season can result in the Regulatory Commission punishing the player in a manner that they deem to be most fitting.  That doesn’t often happen.

And if that is right, then matchweek (or as it is called in some places gameweek) 19 includes the games on Boxing Day and 27 December.   So players have to avoid five yellows by then.  Which by and large makes it four games to go.

Now of course under this system, it is possible for a manager to avoid playing a player who is likely to get one more yellow card to take him over the limit, although I am not sure how often that happens.

So who could be up for the chop – and indeed who is already chopped?

No one from Arsenal – which is not surprising as we are running the “don’t tackle” approach to football, and tackles are of course the prime source of fouls.

If we declare all players on four or more yellows to be a sign of the dirtier players in the league, we can see which clubs are the naughtiest in this regard

So it looks like most clubs are managing their playing habit quite well in terms of not losing multiple players.   Except Burnley – which is certainly what we found on our away trip there.

Interestingly Burnley are 13th in the fouling league having committed 44 fouls fewer than Watford, the out and out fouling champions of the year.  Which really does tell us something about the fouls Burnley put in – they come from a couple a rather irksome oiks.

And what is even more interesting is the fact none of the top five fouling teams has a player pending a suspension – which clearly suggests that these days the tactic is either to cut tackling or to share the fouls out to avoid the yellows and the bans.

But those forthcoming bans do reflect the number of yellow cards certain clubs pick up.

Which all rather explains why Untold Arsenal invented the phrase “rotational fouling” way, way back in our early days, to explain how clubs played against us in the Wenger years while avoiding yellows and reds.

As noted from time to time, the phrase has slipped into journalistic use.  Our contribution to the lexicon, no less.

And here is one more thought.  We are almost one-third of the way through the season and we see that two clubs have collected almost twice as many yellows as Arsenal.   And looking at that Liverpool total of 14, it shows just how different their behaviour was in the game against us last time out as they dramatically upped their fouling rate, just for that game.

What a naughty bunch of ne’er-do-wells those fellows are in the north west.