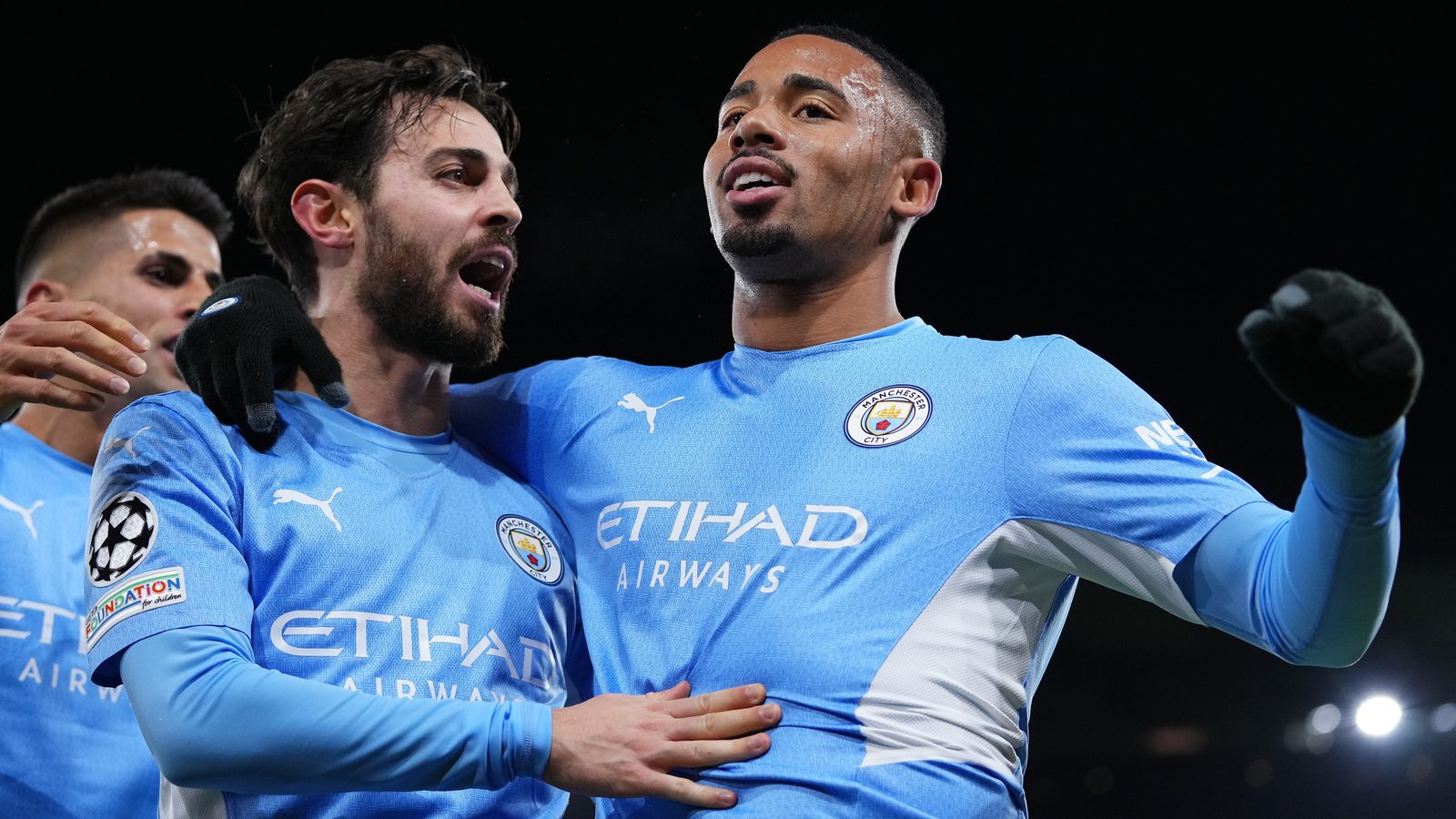 Pep Guardiola said Manchester City made a statement with their victory over Paris Saint-Germain, while Mauricio Pochettino denied the speculation over his future had unsettled the French side at the Etihad Stadium.

Raheem Sterling and Gabriel Jesus struck as City responded to a Kylian Mbappe goal to claim a 2-1 win to seal top spot in Champions League Group A.

City will now go through to the knockout stages for a ninth successive year and, despite the defeat, Pochettino, who has been heavily linked with the manager's job at Manchester United, also saw his PSG side reach the last 16 after RB Leipzig's 5-0 success at Club Brugge.

1 - Manchester City’s victory ensures they will finish top of their Champions League group for the fifth consecutive season – just the second English side to do so in the current format of the competition after Manchester United between 2006-07 and 2010-11. Dominant.

'We are happy to be in the next stage'

Asked if City's victory over such a star-studded PSG side sent out a statement, Guardiola said: “Of course.

“PSG – what a team, what players, what can I say? We tried to keep these players far away from our goal. When they are close to your goal they can do anything.

“Except for five minutes after we conceded, when they [went for the] knockout on the counter-attack but couldn’t finish, we made a really top performance.

“We are happy to be in the next stage. Congratulations to everyone in the club. It’s many years of being there.

“Now we will focus on the Premier League and try to arrive in February in the best condition possible to go to the quarter-finals.”

Clinton Morrison on Soccer Special: "Man City have landed a big psychological blow on PSG. "It was a proper football game and City deserved their victory. In the first half they were outstanding. They created so many chances and they were the better team. You didn't really see the PSG front three in the first half. "However, in the second half we saw what they can do with Lionel Messi, Neymar and Kylian Mbappe. They scored a really good team goal. "But then Man City just turned it up again. It was a really positive performance from Man City and Pep Guardiola will be happy to get the three points that seals top spot in the group.

"It's a big statement from City against a superstar PSG team."

Pep: Hopefully we can keep this going

City were without three creative players in Kevin De Bruyne, Jack Grealish and Phil Foden, the latter pulling out on the eve of the game with a minor injury problem.

That forced a change of plan with Oleksandr Zinchenko, who has chiefly played as a left-back under Guardiola, drafted into an attacking midfield role.

“We know each other quite well and they know what they have to do," Guardiola said.

"They are smart enough. Oleks has not played this position much but plays there for Ukraine.

“We played really well and the way we are performing is really good. People enjoy watching us and we are enjoying playing.

"Hopefully we can sustain this as long as possible.”

Poch on speculation: 'The players know the situation'

Paris Saint-Germain head coach Mauricio Pochettino refuses to 'talk about the rumours' regarding speculation linking him with the vacant Manchester United managerial job.

It was a frustrating night in Manchester for PSG boss Pochettino in a week in which he has been heavily linked with the managerial vacancy across the city at Manchester United.

He denied the speculation over his future had unsettled the squad.

The former Tottenham manager said: “The players know very well the situation – we are living in a business in which rumours are there, sometimes negative, sometimes positive. That is what we say about the rumours.”

'We need to look forward'

Despite the defeat, PSG will still go through to the last 16 as group runners-up.

Pochettino said: "Yes, disappointed but, at the same time, Man City, in the first half, they played well, and they forced us to play deeper. They were very aggressive.

"Being honest, I think we need to give the credit to Man City. But, second half, it's true after 0-0 in the first half, we scored, we were calm because we were controlling them very well. The circumstances of the game changed a little bit and we conceded two goals. Man City is a very good team.

Really pleased to see @ManCity beat #PSG tonight as it showed no matter what superstars you have in your team you can’t carry passengers defensively. PSG can’t win #UCL with only 7 players defending! #MCIPSG

"The objective was to qualify and then to be first. But we beat Man City in the Parc de Princes, we lost here. The difference here is the draw against Brugge and Leipzig, that is why we finished second, not because of the two games we played against Man City."

He added: “Credit to Man City, they are a really good team. We are disappointed but we need to look forward.

“We are improving and I am happy in the process. Things are better than one month ago and much better than two months ago. Little by little the team is improving.”