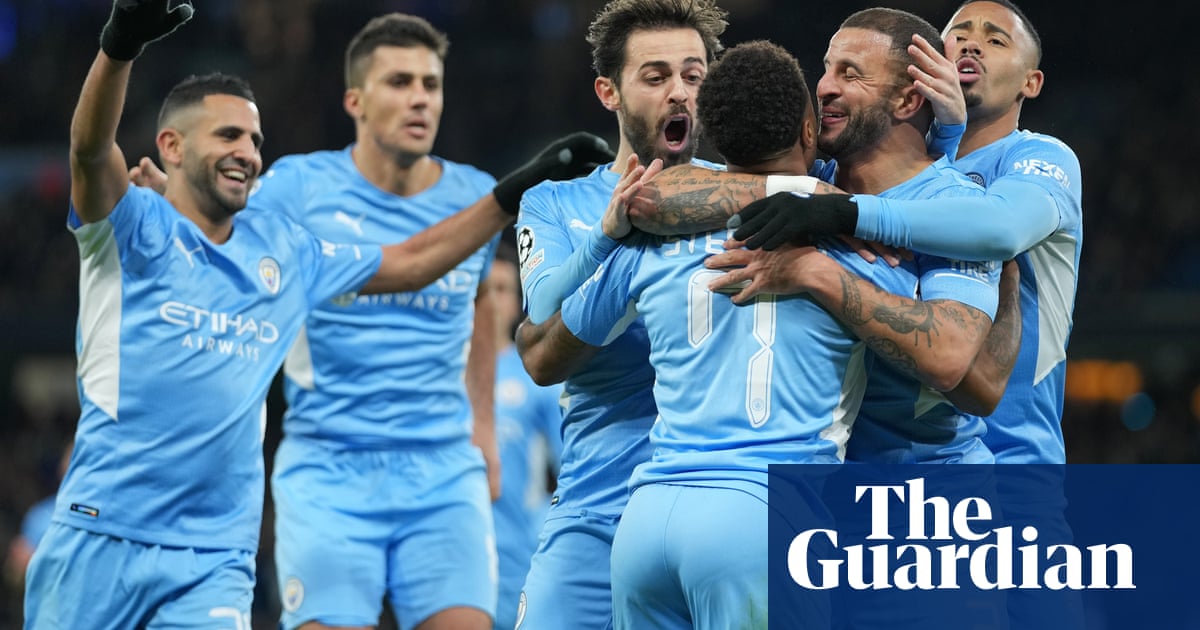 Frankly, this could have gone on all night. Did we have to stop? Did we really need to call an end to it? On a chilly, still night at the Etihad Stadium, Manchester City produced a performance that was oddly hypnotic: a brilliantly fluid, delicately stitched, oddly gentle display of how to win a game by simply picking your opponent apart.

For the opening 45 minutes they stuck those fine, sharp fingernails into the guts of PSG. It was melodic in the flesh, the ball passed with a thud and a fizz between the sky blue shirts, one of those periods where a team seems to be speaking to itself.

City completed 266 of 286 passes, had 11 shots and five corners. Bernardo Silva and Riyad Mahrez were astonishingly good. At times it felt like some kind of high-water mark being reached. It would be easy to say this was the best team in the world in action, but you know Bayern Munich will have a say in that, and City will always present their own weaknesses too. It was simply a thing all of itself, City in a moment of perfect City, a team bred and grooved and moulded to be this thing, and finding a perfect pitch.

Consider, for a moment, the winning goal, scored by Gabriel Jesus but made by Silva, who produced what will go down as an assist, but was also just a jaw-dropping moment of understated quality. Mahrez looked up and saw a classic Pep Guardiola overload to his left. He launched the perfect looped pass, drawing the defender into its arc, as Silva had time to see all the moving pieces, and conjure the cushion volleyed touch inside as the ball nuzzled his instep.

Jesus was free to roll the ball over the line. Silva is an amazing footballer in so many ways, a tiny little scamp of a thing, without a set role, almost out of the club last summer, and at times easily overlooked. But he can also do pretty much anything with a ball, dribbling like a maniac, passing long and short, and producing a touch here to keep in a jar on the mantel, so ornamental but also so viciously to the point.

Guardiola had picked another surprising starting team. Deprived of Phil Foden, Kevin De Bruyne and Jack Grealish, there was a fear City might lack some higher gears. Whereas PSG just fielded that team. The one. The one with the players. Would City find themselves swallowed up, outmatched by those starrier qualities?

Actually no. It is impossible to watch Mahrez when he plays like this and conclude that there might be more skilful, more watchable footballers anywhere, let alone on the same pitch. He is simply the most Mahrez player in the world. His first touch was a soft little back spun trap of a looped crossfield pass, a bravura touch, a touch to draw gasps and coos. Here is a footballer who intimidates not by banging his chest and roaring in the tunnel, but with his ability to trap the ball.

On 18 minutes he did something incredible, pulling out of his imagination a soft-pedalled little no-look pass to Ilkay Gündogan by the byline, a move that might have ended with Mahrez scoring the most extraordinary goal but for a desperate block.

As for Paris, well they were both absorbing, in the way a fire eater is, or a juggler, and deeply disappointing. The idea Mauricio Pochettino is ready to stride across town and take up office at Old Trafford seemed to lose some air over the last 24 hours. He was all business here, striding his chalked quadrant magisterially in tailored three-quarter coat and sombre suit like a handsome young Victorian cotton mill tycoon.

But really, what kind of team was this? What did PSG have in that first half? Deep, dogged defence – and nutmegs.

Six minutes in Lionel Messi nutmegged Raheem Sterling as he closed him down aggressively, a moment of such craft and miniature skill Sterling seemed to stagger away and become a spectator for a second, wandering off, vaguely, in the direction of Altrincham. Neymar did some bits. There was another nutmeg from Kylian Mbappé, who then ran into the knee of Rodri, a knee that is made from some harder substance – man rock, human tree. The French media have been calling this jerry-built all-star attack “l’union sacrée”. Well, not yet old bean.

PSG were always likely to score at some point. They came into this game with not one but three shotguns above the fireplace. One of them was going to go bang. The goal was sublime, made by a sudden switch into joined up, high-speed attacking interplay, Messi the provider for Mbappé.

City pressed back and equalised, the goal made by a fine pass from Rodri and stubbed in by Sterling. And from there they were always going to win this game. It is a paradox of sport that a squad assembled at cost of £1bn, another nation state vanity project, can embody so powerfully the virtues of team building and collectivism, can seem like a rebuke to the PSG project with its celebrity obsessions, its piecemeal air.

This is not to say City are a better team than, say, peak Klopp-era Liverpool, or even that they’re the best team in England right now. But for an hour and a half they were a perfect version of themselves, the best Manchester City when Manchester City play like this; and a kind of manifesto performance for the idea, the tenets of Guardiola-ism. This was a moment where they found that perfect pitch.