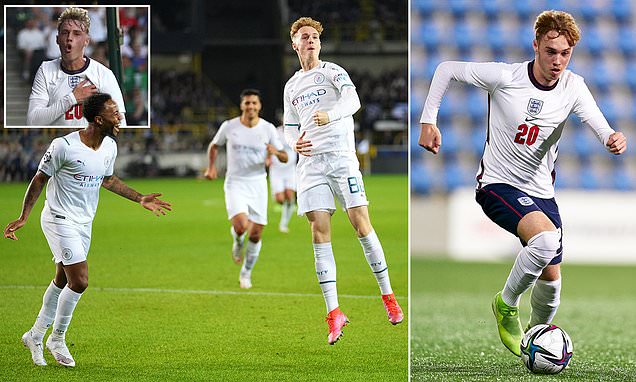 There is a lovely photograph from the Jan Breydel Stadium last week, snapped as Cole Palmer bounced away towards Manchester City’s support in Bruges with Raheem Sterling in tow.

Sterling’s arms were outstretched, his grin somehow wider, after watching the 19-year-old confidently push the cutback ahead of him and then curl home from the box’s edge for a maiden Champions League goal. Trademark Palmer, the sort of finish that those who follow City’s academy teams have seen countless times before.

On the biggest stage, here was a picture that perfectly captured one description of Palmer’s rise by a City source. ‘You can see the other players now looking at Cole and going, “right, WOW.” Nothing is fazing him,’ they said.

Rodri is seen beaming in the background and the majority of Pep Guardiola’s team rushed to mob their newest prodigious talent. Palmer, a wiry forward whose brain has always compensated for his slight frame, counts Sterling as a major help during his settling in period and it was heartening to witness a seasoned professional going through their own stuff react so positively.


Palmer, whose YouTube showreel is awash with the audacious from the right wing or inside, has been around Guardiola’s group since Project Restart. The senior coaching staff are enthused about a raft of youngsters coming through but Palmer shone from the off.

‘He is the next star,’ said one only a few weeks on from his introduction into training. He was handed a European debut in Marseille soon after.

Looking at him flourish among some of the best players in Europe, under arguably the continent’s most innovative manager, it is hard to imagine anything other than this being an obvious trajectory.

Particularly when seeing him wander from the halfway line and passing into the corner for a first-ever professional goal during EFL Cup victory over Wycombe Wanderers last month, with Palmer set for more minutes in the competition at West Ham tonight.

This, though, has been no straight road for a teenager born in Wythenshawe, 11 miles from Phil Foden, and who joined City from NJ Wythenshawe aged eight. Had it not been for academy director Jason Wilcox, City may have parted ways with him three years ago.

Even though he had stood out as City beat Derby County to win the Floodlit Cup - scoring two ‘special’ goals in the final - there was a split camp during conversations between coaches and the academy’s hierarchy over whether he was worthy of a scholarship, the gateway to professional football.

At that point, Palmer was underdeveloped and in danger of his peers racing ahead, while City continued to make signings in his position. Wilcox saw something, however, and is said to have ‘put his neck on the line’ to effectively veto any decision, a show of faith that has been vindicated.

Still, Palmer’s deal was not in line with others of the same age - both in length and finance. With those terms, the youngster was basically told to prove his doubters wrong.

City quickly progress their best talents to the Under 23s, and that team is regularly one of the youngest in Premier League 2, but Wilcox made the decision to hold him back with the Under 18s, where Palmer often operated in an unfamiliar false nine role.

Some at the club might have wavered on what heights he could scale yet the same could not be said for a player packed with self-belief and his parents, Jermaine and Marie.

Jermaine has been steadfast in the belief that his son was destined for the top and surprise at this season’s exploits is not matched within the close family unit. Jermaine spent hours on the park perfecting moves that Palmer then replicated at grassroots level to astonishment and bafflement by his coaches.

A grander platform now. Across seven different competitions for club and country this term, Palmer is averaging a goal every 88 minutes. Add in his assists and it is a goal contribution every 64 minutes.

They have range from the Champions League to a hat-trick for City’s Under 23s, coming on the same day as Guardiola threw him on as a late substitute against Burnley.

‘Rodolfo (Borrell, Guardiola’s assistant) told me that if Cole plays less than 20-25 minutes for us, he is allowed to play in both games,’ Guardiola said. ‘Training with us is nice, but they have to play. When you are just training and not playing, it’s not good for him.’

Guardiola praised Palmer’s attitude when dropping down a level and he was a cut above on the night - much as he has been for England’s Under 21s since Lee Carsley handed him a debut last month.

Palmer only started the first match of Carsley’s reign against Kosovo by virtue of Emile Smith-Rowe’s absence through illness but soon drew gasps from the Milton Keynes crowd when Cruyff-turning a defender to score. It is noticeable that Carsley’s team now look to Palmer at every given opportunity despite his relative inexperience among a group stacked with Premier League appearances.

Carsley knows all about him from his time at City, while England coach Ian Foster played a similar national role to Wilcox’s at club level. Foster constantly championed his cause - picking him in younger age groups ahead of bigger names - and, when they were graded by the FA at St George’s Park, Palmer was categorised as a potential senior player.

That is all this is at the moment: potential. Guardiola has called for patience, although quite how long that lasts is debateable, and that City refused all loan interest last summer tells its own story. Now he must trust that they integrate him in similar fashion to Foden.

It certainly bodes well that, on signing his first big five-year contract in June, sporting director Txiki Begiristain took Palmer to one side and made him realise this was the ultimate sign that he is deemed a first-team player.

Begiristain takes the responsibility of moulding another local lad into a first-team regular exceptionally seriously.

This one, like the other one, appears the archetypal Guardiola player.