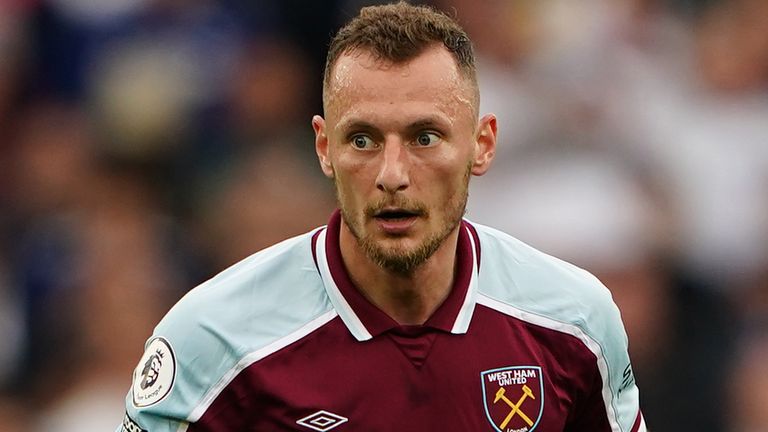 Team news and stats ahead of West Ham vs Man City in the Carabao Cup fourth round on Wednesday; kick-off 7.45pm.

West Ham are set to be without Vladimir Coufal for the Carabao Cup visit of holders Manchester City.

Coufal is unlikely to be risked as he recovers from a groin injury so Ben Johnson or Ryan Fredericks will deputise at right-back.

Image: Nathan Ake is one of the players who could come in for Man City on Wednesday

Manchester City will make changes for the trip to the London Stadium. Pep Guardiola's men have won the competition for the last four seasons with John Stones, Nathan Ake, Oleksandr Zinchenko and Riyad Mahrez among those pushing to come in.

The quartet began Saturday's 4-1 win at Brighton on the bench - a game Raheem Sterling missing with a back complaint. Ferran Torres remains out.

Guardiola plans to use some youngsters but City's options could be influenced by the fact their under-21s are taking on Rotherham in the Papa John's Trophy on Tuesday.

Follow West Ham vs Man City in our dedicated live match blog. Highlights will also be published on the Sky Sports digital platforms and the Sky Sports Football YouTube channel shortly after the final whistle.