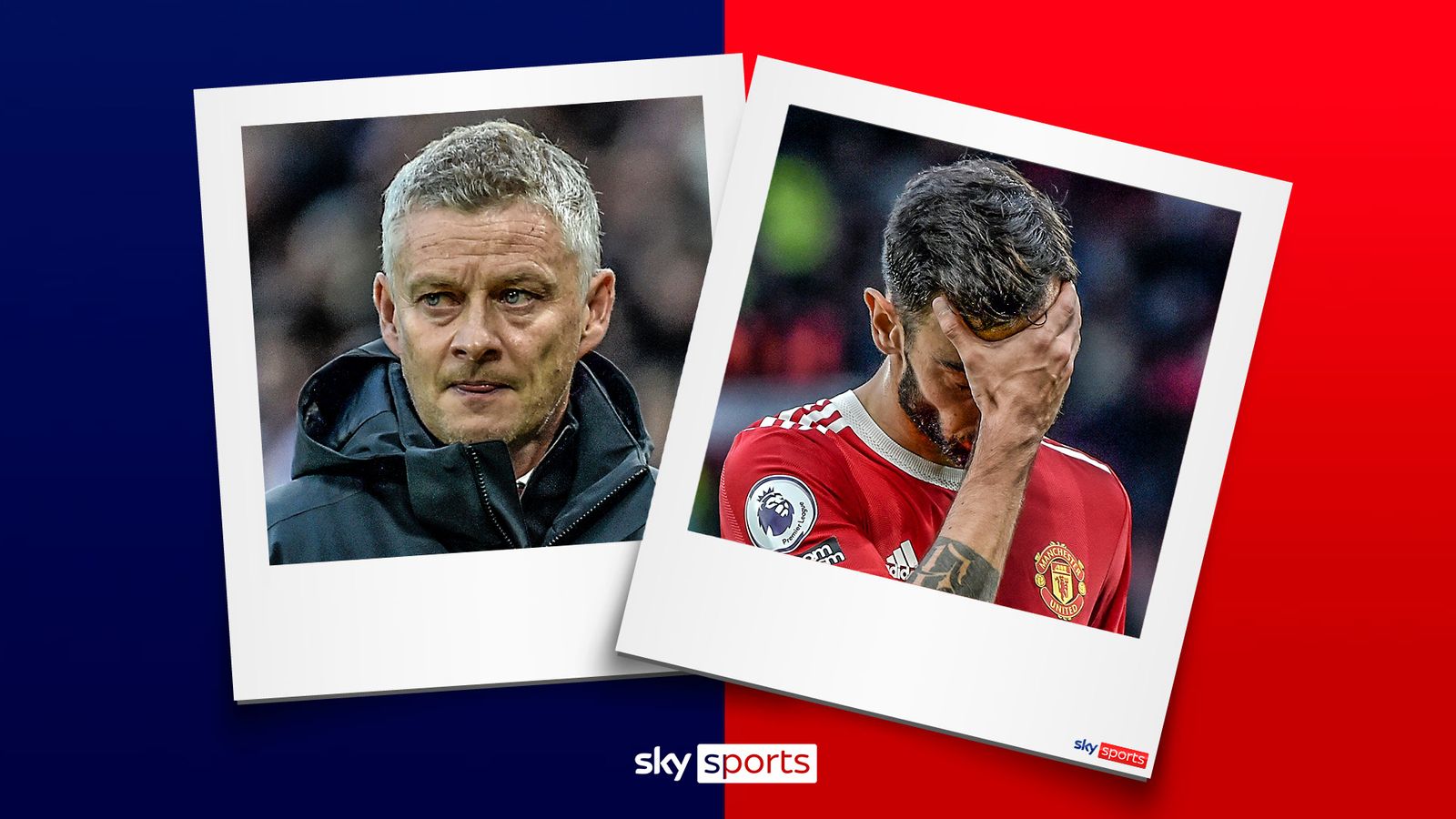 Manchester United suffered one of their worst defeats in history after losing 5-0 to arch-rivals Liverpool at Old Trafford on Sunday - but what are the stats behind their latest slump?

Sky Sports pundit Gary Neville claimed the pressure on Ole Gunnar Solskjaer had cranked to "intolerable" levels as news of the humiliation reverberated around the globe.

United were 4-0 down by half-time and Paul Pogba was dismissed when the Norwegian's side were already 5-0 down and Mohamed Salah had sealed his hat-trick and entered double digits for league goals with just nine games played.

The result came almost a decade to the day since the shocking 6-1 defeat by Manchester City at Old Trafford in front of a similar 75,000-strong crowd, when United were also reduced to 10 men early in the second half.

The Red Devils slip into seventh on goal difference - locked level on 14 points with Everton, Leicester and Arsenal. Not quite the start many fans were expecting after a runners-up finish last term preceded a stellar summer transfer window.

United have now suffered three defeats in four Premier League games, including losses against Leicester and Aston Villa and punctuated with a 1-1 draw at Everton.

Major trophies and perhaps even their first league title in nine years appeared to be drawing closer - but the numbers suggest United remain off the pace.

United have picked up 34 points from clashes with 'Big Six' opposition during Solskjaer's reign - nearly half the tally collected by title-tussling Liverpool and Manchester City during that period.

The contrast in application on the pitch between the United and Liverpool players was polarised on Sunday, which also raises eyebrows about the level of investment spent on signings.

Solskjaer has overseen a league-topping £312m net spend, while Klopp has actually made a £3.6m profit from transfer deals since the winter window of 2019.

Critics have cited United's recent running metrics as cause for concern, with the club ranking 14th for distance covered in the Premier League this season.

However, fellow 'Big Six' rivals Tottenham and Chelsea also rank lower, and United also typically play a high line - which reduces the distance required to cover by playing in a compressed area of the pitch.

But matchday numbers shed greater light on the matter by revealing United have run 25km fewer than their opponents in the nine games so far.

Solskjaer's side have recorded lower distances in seven of those fixtures - while the two games when they outran opposition, against Wolves and Newcastle, were effectively equal in work-rate.

In term of the players, Scott McTominay and Bruno Fernandes cover the most distance among regular starters, but Jesse Lingard and Edinson Cavani also cover considerable distance - albeit from short bursts of game time, often as late substitutes.

Much has been made of United's lack of pressing this season and the numbers certainly appear damning, ranking bottom in the Premier League for tackles and duels and not far off rock bottom for interceptions, aerials and recoveries.

Advanced metrics which attribute a precise figure on how many times each team presses the opposition places United in 16th - ahead of only Wolves, Tottenham, Newcastle and Norwich.

Digging down deeper to the players, Lingard emerges as the club's top player for pressing - but this is skewed by the fact the England winger has played only 55 league minutes this term.

Bruno Fernandes and Fred lead the way among the club's regular starters, while veteran forwards Cavani and Ronaldo rank at polar ends with Cavani typically pressing 36 times per 90, compared with Ronaldo's 13.

Defensive issues have been the primary issue behind this recent slump, but the fact United won a league-high 31 points from losing positions last term suggests the attacking strengths have been propping defensive weaknesses for some time.

As the graphic below reveals, United rank 13th worst with 15 goals conceded and expected goals data suggests that is almost exactly the number they should have shipped from the quality of chances conjured against them.

Interestingly, United are beginning to rank very poorly for points lost from winning positions, having ceded five already - which could be an indication that the tide is turning and the customary comebacks are waning, despite the dramatic Atalanta result last week.

Indeed, the failure to overturn results, and mistakes, are becoming more prominent. United have made a league-high seven errors leading to a shot against them - of which only one has been punished with a goal.

But the map below suggests the majority of these occurred down the left channel, an area which came under widespread criticism on Sunday.

Speaking after the Liverpool defeat, Neville added: "Manchester United need to change. I believe Ole Gunnar Solskjaer is going to get the opportunity to change. But there is going to be pressure from every source."

To compound the Norwegian's woes, United now face a gruelling run of fixtures through to the festive period, which includes midweek Champions League showdowns with Atalanta and Villarreal and league clashes with Tottenham, Manchester City, Chelsea and Arsenal.

Ole Gunnar Solskjaer admits his side's 5-0 defeat to Liverpool is the lowest point in his time in charge at Old Trafford.