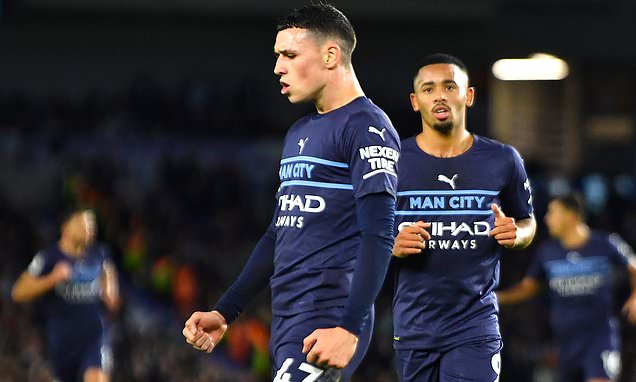 Phil Foden revealed he is enjoying life in an unfamiliar position after his man of the match performance as a central striker in Manchester City's 4-1 win over Brighton.

The 21-year-old has impressed this season in a variety of positions across the frontline, starring against Liverpool on the right, but Guardiola trusted the Englishman through the middle against Brighton, with Gabriel Jesus pushed out wide.

Foden responded with two goals and an assist and had chances to seal a hat-trick, and even though he wasn't able to do so the City star is enjoying the freedom that comes with the position.

'I'm enjoying it. I can drop deep and get on the ball, pick the passes off,' Foden told SkySports.


'It's a new role to me, all I can say is I'm really enjoying it. We change it game to game, sometimes I stay higher than normal.

'This game with how they go man-to-man, the aim was to drop in and get the ball as much as possible. On another day I could have scored three, but the main thing is the result and I'm just happy we got that.'

Guardiola has used all of Foden, Jesus, and Grealish at times as the focal point of the attack, as well as Raheem Sterling, who missed out on the squad against Brighton due to injury.

The City boss was full of praise for Foden when asked why he likes the youngster as a striker.

He said. 'Well I would say I like Phil everywhere! I like Phil for the fact he knows to play football and we can have an extra man in the positions that we want to play, because to pass the ball you have, in certain areas of the game, to have more players.

'He has the quality to do it. The first control, and then after the ability to dribble and be so aggressive attacking 10, 15, 20 metres to the central defenders.

'He scored two goals but I had the feeling he could have scored more because in the last games his decision making is not perfect. But he's [21 years old], he'll improve.'

After the match Jamie Redknapp was full of praise for Foden's display, though suggested even though he shone in the more advanced role, more could be to come in a slightly deeper position.

'My guess is he'd want to play where Bernardo Silva or Kevin De Bruyne, where he's involved all the time,' Redknapp said.

'He’s an incredibly intelligent footballer, he’s so bright with his movement and his goals.

'His all round game is great, but I still think if he played in an even deeper position we’d see even more from him because you know he wants to be on the ball.’