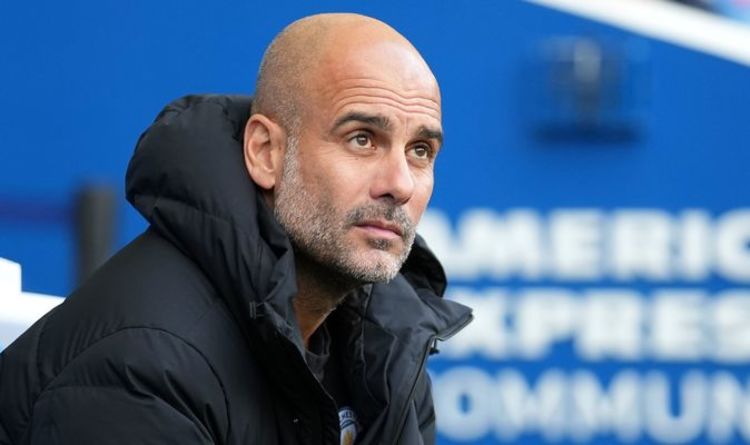 Manchester City boss Pep Guardiola suggested that Phil Foden could soon emerge as the club's first-choice centre-forward after his side's impressive victory over Brighton and Hove Albion on Saturday. Goals from Ilkay Gundogan, Riyad Mahrez and a brace from Foden sealed all three points for the defending Premier League champions, who were the better side throughout the majority of the contest at the Amex Stadium.

Gundogan gave the visitors an early lead after just 13 minutes when he guided the ball home from close range after Robert Sanchez's error between the sticks for Brighton.

City quickly doubled their advantage through Foden, who found the top corner on the slide before adding another with a fortunate deflection off Gabriel Jesus' first-time effort.

Brighton were given a potential route back into the game when Alexis Mac Allister lashed home from the penalty spot as the clock ticked down, but Guardiola's side were in no mood to loosen their grip.

Mahrez's last-gasp finish in stoppage time placed the outcome beyond all doubt and extended City's winning streak to three matches in all competitions.

The result saw them move up to second place in the Premier League table, just two points behind early leaders Chelsea and two ahead of third-placed Liverpool.

JUST IN: Newcastle draw at Crystal Palace shows owners must have three aims

Guardiola's side were simply too good for Brighton (Image: GETTY)

Foden was undoubtedly the star of the show for City on Saturday despite taking up a slightly deeper role in the middle of the park than he is used to.

However, Guardiola suggested after the full-time whistle that his long-term future could be as a striker, which suggests that City could forgo the addition of a new No 9 ahead of next season.

"Phil is a player who can play in different positions but especially up front because he has the quality, the precision.

"He had many chances to score in recent games, but he is young and will keep improving."

Although Guardiola could opt to deploy Foden as a centre-forward on a long-term basis, it remains to be seen whether the 21-year-old would prefer to stay deeper.

The man himself revealed after the full-time whistle that he is enjoying his new role, insisting that he could easily have walked away with a hat-trick on a different day thanks to the position working in his best interests.

"I'm enjoying it, I can drop deep and get the ball and pick the passes off," Foden told Sky Sports.

"It's a new role for me and I can say I'm really enjoying it. It changes it game to game.

"Sometimes I stay higher than normal, but this game they went man-to-man so I dropped a bit deeper and I thought we used the extra man well.

"We are on a good run of form, but we just want to keep going now for the next games and keep that level.

"On another day I could have scored three, but the main thing is the result and I'm just happy we got it today."