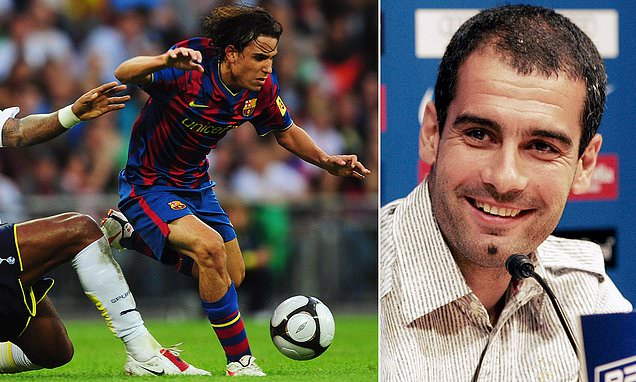 Pep Guardiola once asked his players to pick the team for a crucial match when he coached Barcelona B, one of his former proteges has revealed.

It was the Manchester City manager's first job in the dugout and the former midfielder had guided the club's second-string outfit to the brink of promotion to the third tier of Spanish football in 2008.

Gai Assulin, one of the members of that squad, told Goal: 'We were in the promotion play-offs, and I remember the last game...

'We drew the first leg away, so then, the second game at home, everyone was so nervous. Getting promoted or not depended on that game.


'In the last training session, [Guardiola] said to the captain: 'You choose the team, you guys pick the players.

''I don't care which of you plays because I trust you 100 per cent and I know you will win. You choose the team, I will be sitting and enjoying myself.'

'It's something that stays with me, as I never heard that from any manager since. In the end, all of us wanted to play, so he had to choose in the end, but it's an experience that stays with me. If there's one thing coaches like, it's choosing the team!'

The team were duly promoted to Segunda Division B, but Guardiola was destined for bigger and better things, taking over the reins of the first team from Frank Rijkaard and guiding Blaugrana to a memorable treble with a style of football that other teams could only stand and marvel at.

Assulin meanwhile saw his time at the Nou Camp hampered by injury after rising through the ranks at La Masia and was unable to force himself into Guardiola's plans on a regular basis on his return.

A move to the Etihad under the tutelage of Roberto Mancini gave the Israeli the chance to start afresh, but seven loan appearances at Brighton - then in the Championship - were all he had to show for his efforts before he returned to Spain with Racing, where he played regular first-team football for the first time - only for the team to suffer relegation from Segunda Division.

He did manage to stay in the second tier after securing a loan move to Hercules - also relegated - before a transfer to Real Mallorca in 2014.

An opportunity to revive his career in Britain at Rangers ended abruptly when he was not offered a contract by Mark Warburton following a trial and Assulin returned to his homeland to sign for Hapoel Tel Aviv in late 2015.

That spell was also short-lived and the winger again moved back to Spain to join Sabadell before a stint at Kazakh club Kairat, currently in the Europa Conference League.

Assulin, now 30, is now living in Manchester as he looks to earn another move to an English club following recent spells in Romania and Italy. Now married with a daughter, he wants to stay in one place for a while after a nomadic career.

'If I find a club somewhere else I will have to go - it is work - but I am talking to a few clubs here in England, trying to create a profile here. I have been everywhere, but this is home.'