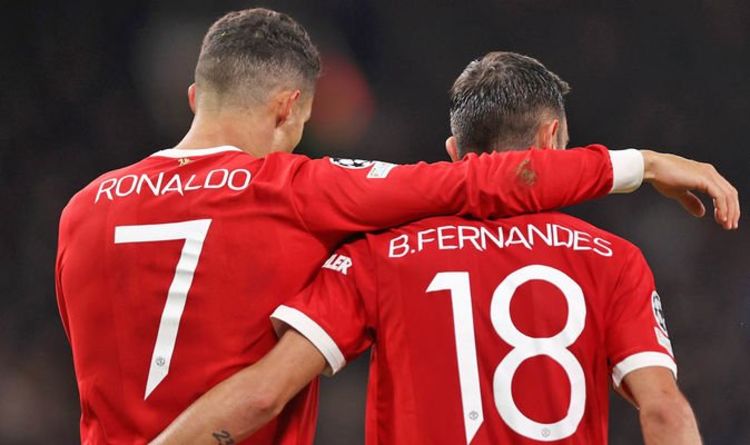 Manchester United duo Cristiano Ronaldo and Bruno Fernandes’ partnership on the field has been backed to bring ‘disharmony’ to the club. The Red Devils have seen the pair shine despite their patchy form under Ole Gunnar Solskjaer. But former Aston Villa star Gabriel Agbonlahor has his doubts.

United have been hit and miss under Solskjaer this season.

But Ronaldo and Fernandes have been two shining lights amid the darkness, with the pair both key to the cause.

Ronaldo has scored six goals since returning from Juventus on transfer deadline day, while his compatriot has four assists from his last four appearances.

Yet Agbonlahor, speaking to Football Insider, thinks their close relationship on the pitch could bring ‘disharmony’ to the club.

“Ronaldo is not going to have the impact everyone probably thought he was going to,” he said.

“I don’t see Man United winning everything with Ronaldo, especially not the Premier League or the Champions League.

“The problem is, because of his profile and how good of a player he was, everyone feels like they’ve got to pass to him.

“They feel they’ve got to make a goal for Ronaldo.

“He’s going to be the downfall of Man United, for me.

“It was a signing that was done for the fans and to stop him from going to Man City.

Ronaldo himself, meanwhile, has defended himself amid accusations he doesn’t work hard enough for the team.

"I know when the team needs my help defensively,” he said. “But my role in the club is to win, help the team to win and to score goals - [the defensive side] is part of my job.

"The people who don't want to see that is because they don't like me but to be honest I'm 36, I win everything so am I going to be worried about the people who say bad things about me? I sleep good at night.

“I go to my bed with my conscience very good. Keep going with that because I will still close mouths and win things. Criticism is always part of the business. I'm not worried about that.

“And I see it as a good thing to be honest. If they worry about me or they speak about me, it's because they know my potential and value in football still.

“So it's good. I'll give you an example: if you're in a school and you're the best student, you ask the worst student if he likes the best, they'll say they don't like him.

"I think the main word is that I'm still happy and enjoying football. It doesn't matter how many things I won in my career. I win everything but I'm still motivated.

“I’m in a new chapter of my life, even with my age, and this is why I am here - to try to win and I think Manchester needs to be at this level of winning and thinking to win big things so I'm here to help."