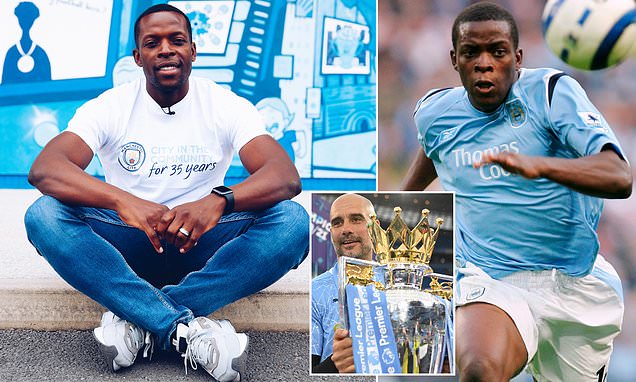 Nedum Onuoha still remembers his bus timetables. For the 111 towards Platt Lane. For the 149 to get back home in Miles Platting. The interchange at Piccadilly Gardens being the centre of his universe.

His mother worked in Sheffield and his father held two jobs on four hours’ sleep so Onuoha had to fend for himself pretty quickly. The buses were how the small Nigerian boy discovered Manchester. It became his home and life has now come full circle.

The Manchester City academy graduate, who joined the club aged 10 and made more than 100 appearances for the first team, is back. And he wants to serve.

Ending his playing career in America last year, Onuoha has been appointed as a trustee on the City in the Community (CITC) board. It is rare for an ex-Premier League player to hold such a position and it is one he refuses to take lightly.


‘If it was a case of being a silent partner then just wheel me out, I’ll take a picture, sign an autograph,’ he says. ‘I like the idea of being part of the process. You know every detail, why it matters.

‘This charity is 35 years old this month and they are very successful. I was actually part of the scheme when I was younger, taking penalties against Alex Williams. I should’ve realised then that penalties weren’t for me.

‘I’m entering the board as the youngest person by… possibly a lot. Possibly the person who’s lived closest to the stadium. I’ve not moved to south Manchester and thrown money about with Bentleys.

‘I could perhaps be a link to the people who we’re doing this for. Beautifully, every time I come to the Etihad I drive past my old house down Bradford Road.’

About that house. Onuoha’s love affair with this area was not immediate, immigrating Nigerian families not exactly welcome in the 1990s. He tells a story of planting a thunderous headbutt on one bully at school.

‘Miles Platting in the 90s was horrendous really,’ he says. ‘We had neighbours burgle our house, we had people walking by setting cars on fire. It was not the best time to be black and foreign. People calling you this and that. I sounded like a Nigerian kid so you can imagine how that went.

‘For the first few years we were very much a Nigerian household in Manchester. People weren’t willing to accept us. It was school, home, school, home. There was no social element.’

Onuoha became a budding sportsman, however, both athletics for Trafford and football at City providing some form of escapism.

His favourite memories are dashing over to Moss Side — on a bus, naturally — to make it in at Maine Road for three o’clock on a Saturday.

‘I got a ton of old City programmes when I started as a ballboy around ’97. Reading the history, before the Premier League. Our doorway was right in the tunnel, so you see the players walking out. Incredible! The only downside was that I worked at the North Stand, the only area that didn’t have seats for us. It was also the place where you’d get most stuff chucked at you from aggressive fans.

‘But this all plays into the story. I was a ballboy for Shaun Wright-Phillips in the Youth Cup. Then my academy team were the last to ever play at Maine Road, our play-off semi-final. The last official game. We lost.

‘When City first moved to Carrington, I would go to train with the reserves or first team and actually arrived on a bus. People were leaving in Ferraris and I was waiting outside at the bus stop.’

Onuoha sounds most passionate about tackling mental health, citing the pandemic as a trigger, and references on a number of occasions that he wants to impress that CITC is more than mere soccer schools. He wants to reconnect with an area that offered good and bad experiences that ultimately shaped him.

Mental health, he says, is an issue he endured at City but was too frightened to ask for help, presumably because of the game’s macho culture.

A programme named City Thrive is raising funds to help young people between 14-25 across the area. ‘Care about the people around you,’ he says. ‘When I ask people how they’re doing, I wait for an answer. I don’t walk away. I genuinely want to know. That was a big deal for me in my career.’

There comes an admission that he left Wembley when City were two goals down against Gillingham in the famous 1999 Division Two play-off final. He admits he listened to the comeback and penalty shootout win on his Walkman while scoffing a Big Mac.

There is a curiosity to Onuoha. Playing abroad with Real Salt Lake was an eye-opener and he does not mind confessing that he retired earlier than he might have done, with priorities lying elsewhere. He was in America for two years and felt liberated for the experience until 2020. Obvious reasons. ‘One of the best places I’ve been to, best experiences but that was a very significant year in America’s history,’ he reasons.

‘To have been there as a foreigner, to see how crazy it could get, there’s stuff you’ll never forget. From a political standpoint, it was insane. You see the theatre going on with certain people in power with the intention to rile certain others. Nothing was ever objective. Every experience was subjective. That was blowing my mind.

‘You’d see someone get shot and half would say, “why have you shot someone?” and the other half say, “it’s his right”. There was no budging. There is a divide and nobody crosses over. Nancy Pelosi could be giving €1,000 to anybody who came up to her in the street and those on the right would say it’s because she’s a communist and wouldn’t go and receive it.

‘I also realised that the biggest news channels over there are associated with Fox and that has the most dangerous rhetoric. In the UK it would be deemed as fringe. In America, that’s mainstream.’

Onuoha checks himself. ‘But the year and a half before that was just perfect. We were an hour from California, Las Vegas, we were going to some of the most incredible national parks. We’re talking dinosaur territory. We absolutely loved it.’

The time was right to come home and Onuoha, who possesses a real skill for reflection and critical thinking, will be a formidable asset to City.

‘When I was playing at City, I didn’t realise how good I had it,’ the 34-year-old says. ‘I’d drive from Carrington to see my friend over in Parrs Wood or Stretford after training. The city felt like it was mine. That is not a normal experience for somebody playing football.

‘To have that feeling towards the city and the club, which I joined at 10, did ballboying, to be able to come in now and potentially positively affect the community is a very tough thing to turn down. To be on the board and have a voice is incredible.’

City in the Community has launched a Prize Draw to celebrate its 35th anniversary – enter at www.mancity.com/PrizeDraw