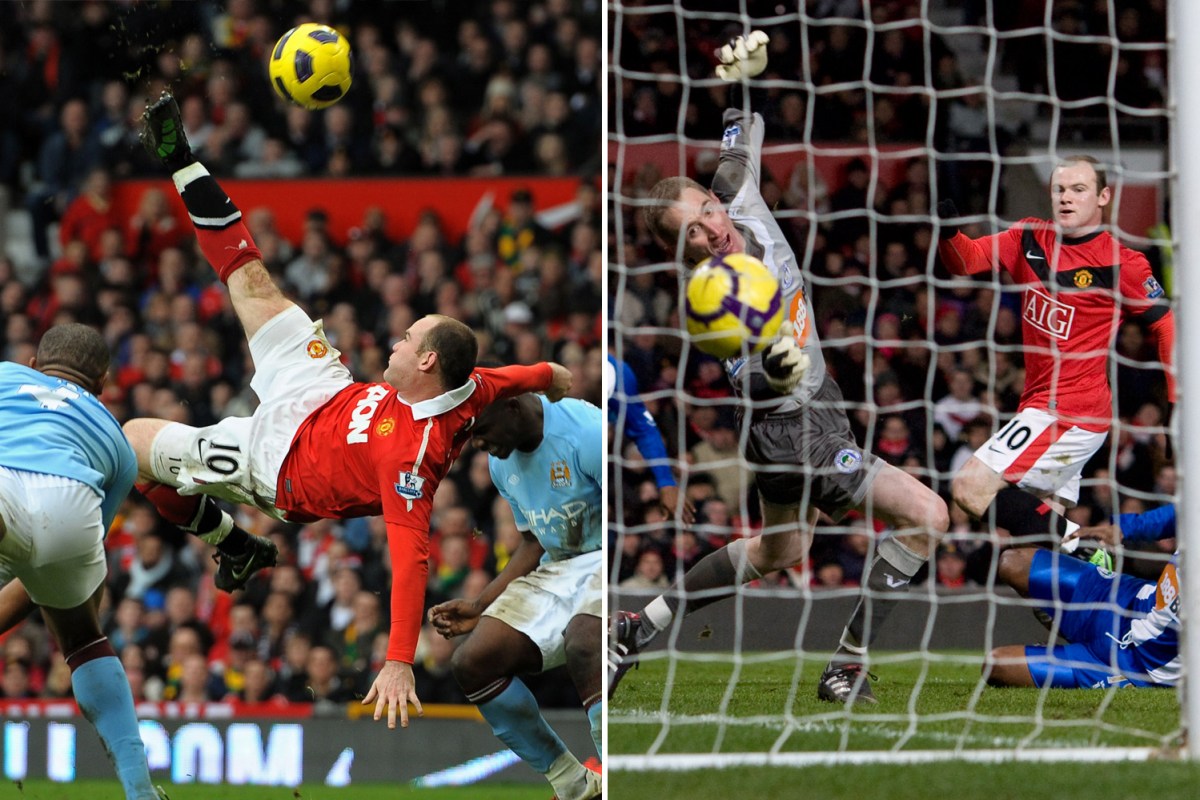 MANCHESTER UNITED legend Wayne Rooney revealed his best goal ever - and it’s not THAT iconic overhead kick against City.

Rooney won 12 major honours during his 13 years at Old Trafford, including five Premier League titles and is the club's all-time leading goal scorer with 253 goals in 559 appearances.

Wayne Rooney scored a sensational overhead kick against City in 2011

Wayne Rooney's best goal is this strike against Wigan, according to the Manchester United legend

The goal the former Red Devils ace, 34, is perhaps most known for is his sensational overhead kick against Manchester City in 2011.

Nani whipped the ball into the box before the ex-England skipper found the net with an incredible bicycle kick to win the match 2-1.

But Rooney previously revealed in The Sunday Times that while that is his favourite goal, his strike against Wigan in December 2009 is the best in terms of craft.

In his column he said: "When asked my favourite goal, I always say the overhead kick versus City — but we’re talking, here, about the craft of goalscoring, how it’s about teamwork, movement, control and timing and a goal that probably few people remember sticks out for me.

"It came versus Wigan, when Rafael crossed from the right and my timing was literally perfect. I got across the centre back, got a nick on the ball and the keeper had no chance."

The Manchester United legend, who now manages Derby in the Championship, revealed that former Old Trafford boss Sir Alex Ferguson, taught him how to stay sharp up until the dying moments of a game.

The 35-year-old said: "You learn little things along the way. The best advice I received was from Fergie.

"He’d say, 'You’re working too hard,' and at first I thought, 'What do you mean? Isn’t that what you want?'

"But I used to try to run as hard as I could for 90 minutes and in the last ten minutes be tired. The manager wanted his strikers to keep a little bit in the tank, because that match-winning chance might not arrive until the 90th minute — Fergie time!

Rooney also gave credit to current United boss Ole Gunnar Solskjaer for teaching him valuable tricks of the trade during his time at Old Trafford.

He said: "Before joining United, I’d seen Solskjaer scoring all these goals by shooting through defenders’ legs — incredible. I watched him in training, I spoke to him: 'How do you know what the defender is going to do?'

"It was quite simple. Ole explained that when you shape to shoot, defenders tend to stick their leg out to try and block and that makes a gap.

"He perfected the technique. And it’s harder for the keeper because they don’t see the ball when it leaves your foot. I scored one past Joe Hart against Manchester City that way."