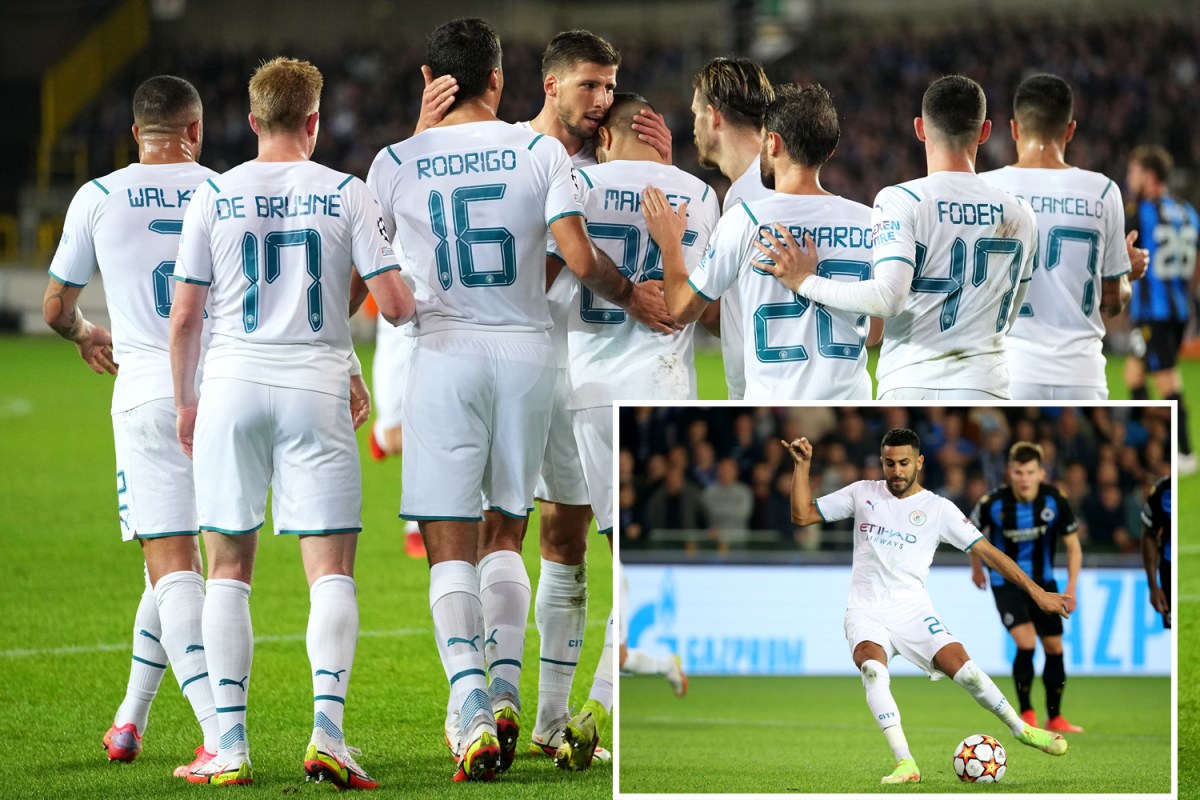 On Saturday the England Under 21 ace was given a couple of minutes at the end of the 2-0 win over Burnley.

He promptly dashed over to the Academy Stadium across the road and scored a hat-trick for Man City's Under 23s a couple of hours later.

Last night he was off the bench again and two minutes after replacing Kevin de Bruyne he scored his first Champions League goal.

KdB had been given a standing ovation as he made his way off in his first domestic game on home soil in a decade.

But the apprentice showed the master how it should be done with Palmer curling home a beauty.

It was the highlight of another blistering performance from Pep Guardiola’s men.

Full-backs Joao Cancelo and Kyle Walker both got on the scoresheet – the latter with his first in the competition.

All that was missing was a goal from Raheem Sterling who was once again left on the bench – with Phil Foden preferred down the middle and once again superb.

The former Liverpool forward had a string of second half chances to end his goal drought but could not find the one he so desperately needs.

The defeat in Paris three weeks ago meant City still had work to do to reach the knock-out stages – but they looked in determined mood from the first whistle here.

Aymeric Laporte got in behind the Brugge defence and squared for Rodri to poke home but again the celebrations were cut short – this time by the offside flag.

City were starting to get in behind the home side and Phil Foden went through next but the angle was too tight and he could only find the side netting.

Brugge were the pot four team in the group and were expected to be the whipping boys but had made a promising start.

Kyle Walker was delighted when he bagged a rare goal - his first in EuropeCredit: AFP

They drew with Lionel Messi and PSG in their first game here then won in Leipzig – meaning they started the night above City in the table.

They had to ride their luck to get to the half hour mark on level terms though.

Kevin de Bruyne was playing his first domestic game back in Belgium since he left to further his career almost a decade ago.

A cut back from Foden presented him with a chance to mark his return with a goal but his shot was straight at his international team-mate Simon Mignolet.

Then Grealish got in behind again and squared for Foden but the ball was nicked away from him – and VAR checked for a penalty.

It didn’t matter either way though as the visitors broke through while the check was still going on.

Foden was revelling in the false nine role and his ball over the top sent Joao Cancelo through and he popped it through the legs of Mignolet.

The Portuguese was pelted with bottles and other objects by the home supporters as he celebrated in the corner.

Both sets of players had been loudly booed when they took the knee before the game – it was not a great night for the Brugge crowd.

And it got worse for them just before the break as Riyad Mahrez was scythed down in the box by a wild challenge from Stanley Nsoki.

There was no doubts about this being a spot-kick and Mahrez picked himself up to send Mignolet the wrong way from the spot.

Like his team, the Algerian has a patchy record from the spot but he looked confident with that one.

It was a scoreline which reflected City’s complete superiority – although it could have been more with both Mahrez and De Bruyne going close before the break.

The quality and work-rate of Pep Guardiola’s men had simply been too much for the Belgian champions to cope with.

Kyle Walker made it 3-0 to the visitorsCredit: Getty

The visitors started the second half in a similar vein with Mahrez and Grealish teeing up Foden but Scottish defender Jack Hendry got there first – and VAR decided it was a fair challenge.

Home coach Phillipe Clement had clearly told his team to try pressing City in the second half – but it meant they left gaps at the back.

A slick move down the right saw Mahrez and de Bruyne combine to play in Walker who slotted the ball through Mignolet’s grasp and into the corner.

The former Liverpool keeper made amends by keeping out a shot from a narrow angle by Foden – all that was missing from his magical display was a goal.

He made way for Sterling soon afterwards – while de Bruyne was also given a rest, walking off to a standing ovation as he replaced by Cole Palmer.

Within two minutes, the pair linked up for number four with Sterling’s pass along the edge of the box picking out his fellow sub.

The 19-year-old took a touch before curling a low shot expertly past Mignolet for only his second senior goal.

Home skipper Hans Vanaken finally gave the home fans something to cheer when he slotted home a cross from the right.

But Mahrez got his second of the night when he raced clear onto a Fernandinho pass to lash home.

There was no luck for Sterling though who got in several times but could not find the goal he desperately needs to reignite his season.