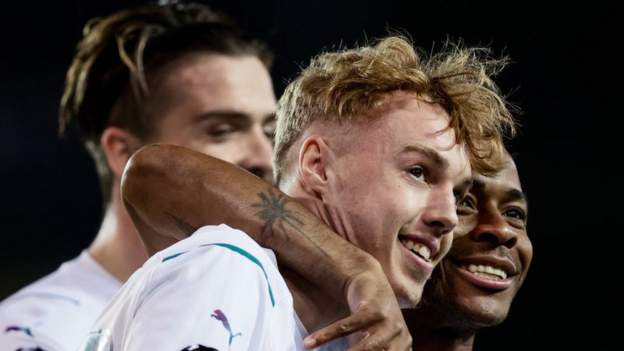 Judging by his latest comments, Manchester City boss Pep Guardiola must be as good a chef as he is a football manager.

"The people in this world want things immediately, quick, but everything needs time," he said.

"You cannot cook a good dish if you don't spend time in the kitchen. So, take time."

Palmer had only been on the pitch for two minutes when he produced a brilliant finish for City's fourth in their 5-1 win in Belgium.

The midfielder has been used sparingly this season. He started the 1-0 defeat by Leicester in the Community Shield on 7 August and has since made four appearances off the bench - two in the Premier League and one in a 6-1 League Cup win against Wycombe, in which he also scored.

"Cole has a special quality," said Guardiola. "Inside the box he has this talent which is difficult to find. When he has the ball there, most of the time it finishes in the net.

"But I know how it works with young players. We are calm and patient, like we have been with Phil Foden as well."

Patience has certainly paid off with Guardiola's handling of Foden, who was one of the star performers on Tuesday.

The 21-year-old also took time to cement his place in Guardiola's first team but is now firmly established as one of the Premier League champions' best players.

Even in the unfamiliar role as a false nine he excelled, making clever runs and playing a number of brilliant passes, including a sublime assist to set up Joao Cancelo for City's first goal.

Riyad Mahrez (two) and Kyle Walker also scored for the Blues, with Hans Vanaken netting for the hosts as they briefly clawed their way back to 4-1 down.

'One of our best performances in Europe'

Victory means City have six points in Group B, putting them second behind leaders Paris St-Germain, who have seven points.

It was also the perfect response to the 2-0 defeat they suffered at PSG in their previous outing in the competition.

"It was a really good performance - one of our best performances in Europe," said Guardiola.

"We controlled the game and our pressing was good. We used the ball with a lot of sense and had many chances.

"We are all delighted."