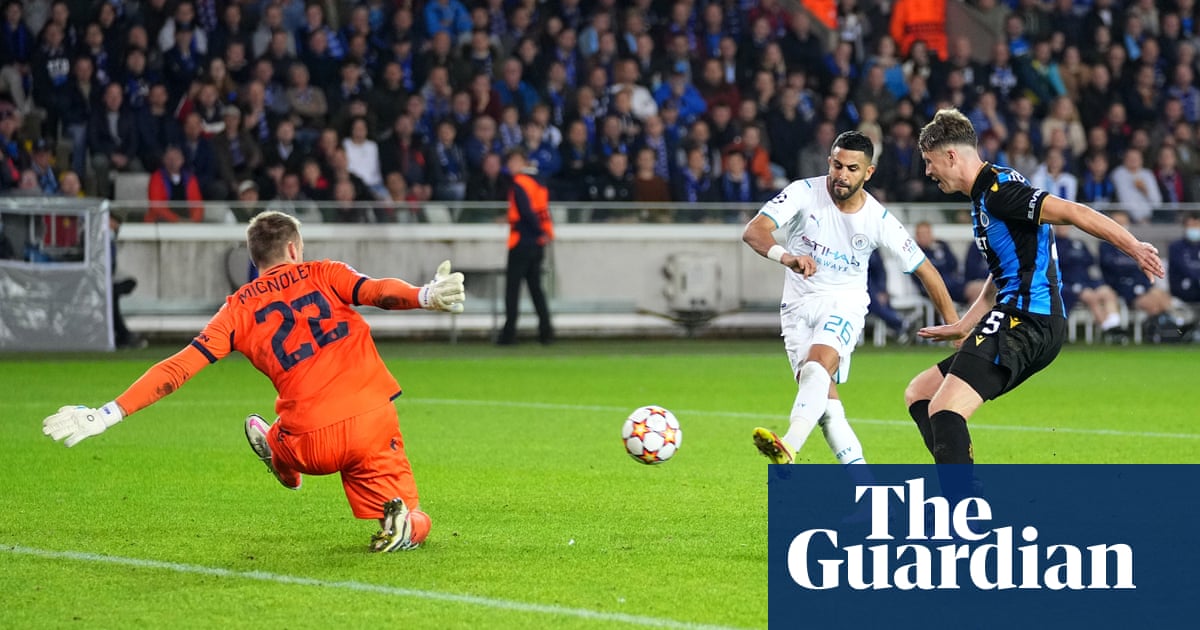 Manchester City were a delight to watch in an exhibition of how the game they can play must surely make their opponent feel frighteningly inferior. Club Brugge had kicked off undefeated in the competition until they ran into a team who made this third Group A encounter a mismatch. Philippe Clement’s side went, simply, the same way as so many can: reduced to extras in the scintillating City show.

Perhaps most impressive beyond the individual flourishes - Phil Foden, in particular, to the fore - was the concerted hunger across a team who kept on hunting the ball and more goals even when going three up after only 53 minutes via Kyle Walker’s dead-eyed finish.

Pep Guardiola was so relaxed he could take off Foden and Kevin De Bruyne just after the hour: an apt summary of how impressive City were at a Jan Breydelstadion, packed and raucous for this early evening kick-off. Those who entered at this point took three minutes to create a fourth as Raheem Sterling skated along the left and zipped the ball over for Cole Palmer, a 19-year-old enjoying a second Champions League appearance, to sweep sweetly in from 18 yards for a first in the competition.

Jack Grealish darted into the penalty area and fell with Clinton Mata in attendance for the opening act of a contest – the forward believed it should have been a penalty. Istvan Kovacs, the referee, had a clear view and waved the appeal away. Next, Grealish lobbed Simon Mignolet to find the net but this time Kovacs did rule a foul, for a push on Mata.

Moments later, the No 10 chested a pass, rolled the ball to an overlapping Bernardo Silva, but when he delivered no team mate could finish.

This was ominous from City who can be a juggernaut when approaching high gear. A Rodri offside strike and Foden finding the side-netting continued the gathering momentum. In their pristine white away strip the visitors were a whir of invention, Rodri scooping balls around and across the turf, as Foden’s sense of geometry bewitched the hosts.

There was a breathtaking moment when Foden, in traffic, swivelled and skimmed a pass to João Cancelo along the left that had Brugge’s rearguard scuttling, which summed up City’s quality. Toothless was a fair characterisation of Clement’s men and when Mata strong-armed the effervescent Silva illegally he was the personification of another: frustration. The exact same emotion was felt by the out-of-sorts De Bruyne when Silva teed him up near the penalty spot only for him to unload tamely straight at Mignolet.

The 11 men dominating their hosts formed as close to Guardiola’s current first XI as the serial pack-shuffler might send out, with Foden, the nominal No 9, going close from a Grealish cross, before the youngster created a clever opener. Dropping back to halfway, a diagonal found Cancelo and after some nifty control with his chest, the left-back slid past an onrushing Mignolet.

Sadly, the Portuguese’s celebration was marred by missiles being thrown at him yet from here on City dazzled, an unnerving proposition of angled runs and passes. An illustration came in a rat-a-tat percussive move in which Rodri tapped to Silva who instantly relayed on to Walker, whose attempted ball in was repelled only at the last moment.

At the other end Eduard Sobel’s break forced Ruben Dias to hack away for a corner in a rare Brugge foray. This was followed a little later by a second delivery from the opposite side, which came to nothing.

And, now, came City’s second. Mahrez, quiet thus far, taunted Stanley Nsoki with dancing feet inside the area, the No 4 took the bait and took him down. The Algerian got up and coolly beat Mignolet from the spot, to the keeper’s right, before Foden ended his 45-minute masterclass by darting through, pirouetting, then sliding the ball to Mahrez, who should have made it 3-0.

The second half was a question of how many more City might score given their hunger. Total domination of the ball and tempo continued. De Bruyne lifted in a cross from the left, Brugge scrambled this away. Cancelo tried to feed Foden and the Belgian side, once more, just about cleared. Brugge were being pummelled constantly by those in white shirts who were akin to ghosts they could never quite catch.

Their third came via a sequence that went De Bruyne-Mahrez-De Bruyne, whose crafty pass was smashed in by a jubilant Walker. By the final whistle Sterling had spurned the chance to make it 5-0 and Hans Vanaken grabbed a late consolation before Mahrez did score one more for City.