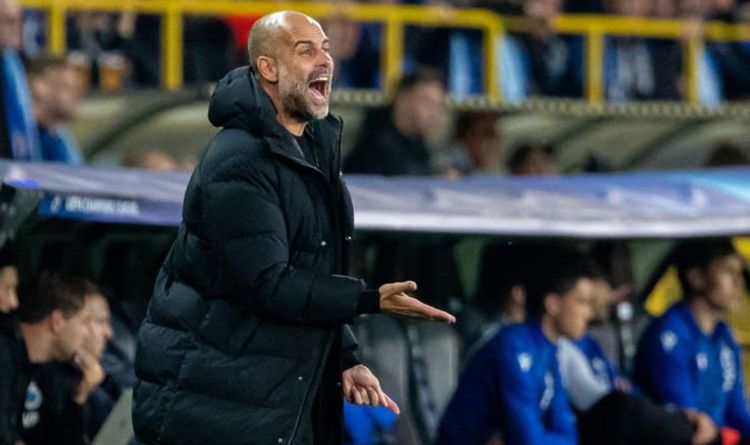 Manchester City romped to a 5-1 win in Belgium on Tuesday as they ran riot against Club Brugge - but despite the numbers produced tonight, they could have been home and hosed so much earlier - by signing a striker to finish their chances.

City were completely dominant against a sorry Brugge side, who didn't even register a shot in the first-half as City went 2-0 up at the interval.

Joao Cancelo, Kyle Walker, Cole Palmer and Riyad Mahrez - albeit from the spot - were the ones on the scoresheet, suggesting a real team effort by Pep Guardiola's men as no strikers scored.

Upon watching the first half, there was something glaringly obvious about City's way of playing - needing someone to finish the chances they were creating.

Yet another sensational performance by Phil Foden, and routine exhibits by Jack Grealish, Riyad Mahrez and Kevin De Bruyne meant that City were constantly keeping hold of the ball - registering 65% possession and doubling the amount of passes their opponents had made by the hour mark.

Pep Guardiola would need a striker to complete the icing on the cake of his City side (Image: GETTY)

But their need for a striker in the post-Sergio Aguero era is clear for all to see as the ball was constantly being played into areas where a striker would be, with no actual striker there.

And this is where Chelsea and Liverpool could thwart them.

Romelu Lukaku signed for the Blues over the summer, giving them a much-needed perspective change after the unfortunate failings of Timo Werner last summer.

Even still, if the Belgian is injured, the Blues have a natural striker who can slot into that spot in Werner.

Liverpool can offer the same; they too play a false-nine system like City, yet with Roberto Firmino able to score with his feet and head, as evidenced in the 5-0 rout of Watford at the weekend.

Against tougher opposition in the Premier League title race, City may come unstuck like they have done against Southampton and Tottenham.

Harry Kane was linked with a move over the summer, but the £150million price tag set on his name was not worth a deal.

And with Erling Haaland available in 2022 for a fee of £68m, City should be doing everything in their power to complete a deal.